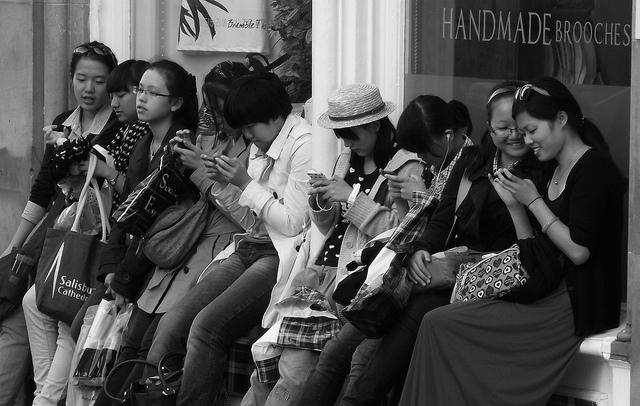 CC/Flickr/byronv2
In any public space these days, seemingly three out of four people at any given moment are checking their phones. And advertisers have noticed.

The Internet continues to roll over every other advertising medium. Having overtaken newspapers several years ago, the Internet has now passed broadcast TV to become America’s dominant advertising venue.

In 2013, for the first time, marketers spent more to advertise on the Internet than they did on broadcast TV, according to a new report by the Interactive Advertising Bureau. The tally: $42.8 billion on the web, $40.1 billion on TV.  By comparison, newspaper ad revenue was about $22 billion in 2012, the last year for which data are available.

But within that immense growth lies another tale: the recent rise of mobile. That should come as no surprise to anyone. In any public space these days, seemingly three out of four people at any given moment are checking their phones. And advertisers have noticed.

I won’t go further into the numbers; the tale they tell is blindingly obvious. In the 21st Century, Americans are creatures of the Web. We depend on the Internet for news, for social interaction, for shopping, for research — for everything.

Newspapers still haven’t found the key to making themselves more relevant to advertisers, though there are scattered exceptions. Local and national TV offer advertisers audiences that are a fraction of what they were a generation ago.

Magazines that serve a specialized niche are holding their own, but general-interest magazines are struggling, because the Internet offers a buffet of entertainment, information and opinion that’s broader than any magazine can hope to match.

Advertisers go where the people are. In 2014, that’s the Internet — and it doesn’t seem like that’s going to change any time soon.

As Internet advertising booms, watch out for mobile