They never could have shot “Mad Men” in Minneapolis. Though the city is home to some of the nation’s top ad agencies, we apparently didn’t get the message that advertising is a cutthroat business.

“This is one of the rare cities where you can be friends with people at other agencies,” said Dave Damman, chief creative officer at Carmichael Lynch, sipping a beer and playing genial host to an all-star collection of Minneapolis creatives gathered last week to help develop the next generation of talent.

Carmichael Lynch hosted Portfolio Night, an annual global event held simultaneously in more than a dozen cities that brings creative directors together to offer feedback to aspiring copywriters, designers, art directors and brand strategists. Though Portfolio Night is in its 12th year, Minneapolis had never been a host city until now.

Matt Pruett, a senior art director at Carmichael Lynch, attended Portfolio Night as a student in San Francisco nearly a decade ago. After relocating to Minneapolis and establishing himself in his career, he was determined to get the city into the rotation.

“When I was a student, I never knew how to get that interview or meet the decision makers,” Pruett said. “I wanted students here to know who they should be talking to — to help them get that network started, establish a relationship that lasts beyond tonight.”

More than 50 students attended, sitting across a table with nationally recognized industry leaders from agencies including Olson, Fallon, Campbell Mithun, Colle + McVoy, Barrie D’Rozario DiLorenzo and a half-dozen others. They went over the students’ “books” in a series of whirlwind 15-minute sessions that have been jokingly called “speed dating for creative directors.”

Whitney Thurman, a recent University of Minnesota graduate, aims at becoming a brand strategist: analyzing consumer data and using it to inform visual identity and messaging.

“This is a great opportunity to get feedback from the best people in the business,” she said.

Another U of M grad, graphic designer Oana Mihai, confessed to some last-minute jitters just before sitting down with Mike Fetrow, Olson’s executive creative director: “I wasn’t that nervous when I came in, but now I am.”

The evening wasn’t only for the benefit of the students. Agency execs were happy for the visibility the event brought Minneapolis within the ad world.

“If you look at the people who are here helping, these are some of the top people in the country,” Damman said. “And Minneapolis has them.” 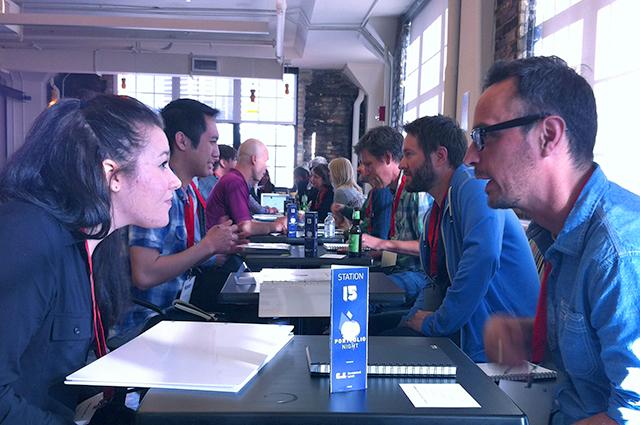