Tamra Kramer enrolled in college at age 30 as the mother of four. So the idea of betting a chunk of her retirement savings on a new business wasn’t all that intimidating.

When Kramer lost her job in a corporate shuffle after a long public relations career at Honeywell and Wells Fargo, it seemed like a good time to give in to what she calls “the family curse.”

“My parents were serial entrepreneurs, and I always dreamed of owning a business,” Kramer said. “I gave myself a year to figure out what was next, and I kept coming back to the idea of opening my own small business.”

But most first-time small businesses don’t open at the Mall of America, as Kramer’s did last week. How did she wind up in the nation’s largest mall, instead of on a neighborhood corner?

Franchising. Kramer invested “a modest six-figure sum” in Minnesota’s first full-line Vom Fass store, a specialty gourmet shop that sells spices, vinegars, oils, wines and spirits in quantities large or small. Founded in Germany, Vom Fass translates as “from the cask” or “on tap.” The store encourages customers to sample and taste its artisanal products, many of which literally are dispensed from taps and kegs.

For Kramer, the franchise route offered a proven concept, with access to knowledge that helped her avoid rookie business mistakes.

“I know about food, but I don’t know about retail,” said Kramer, a resident of Prior Lake. “This is a family-owned small business, but you get a template and you get support.”

She had originally planned her store for the 50th and France area, on the Minneapolis side. But the city’s restrictive liquor and zoning laws threw up too many hurdles. She was introduced to the Mall of America’s development staff, “and this was just the venue where the deal came together,” she said. “So it’s go big or go home.”

Another Vom Fass store is set to open in June at the Shoppes at Arbor Lakes in Maple Grove. The franchisees for that store are George and Jenny Mayaka of Eagan.

“The concept makes sense to me,” said George Mayaka, a native of Kenya. “In Kenya, we sample things. We buy what we need. There are no big bulk stores.” For now, he’ll keep his job as a salesman of industrial tooling while Jenny, a veterinarian, runs the store.

Vom Fass’ U.S. operations are based in Madison, Wisconsin, and the company’s footprint here is still small; Kramer’s is the 19th store and the first to sell the full line of products, including spirits. The newness of the company appealed to Kramer. 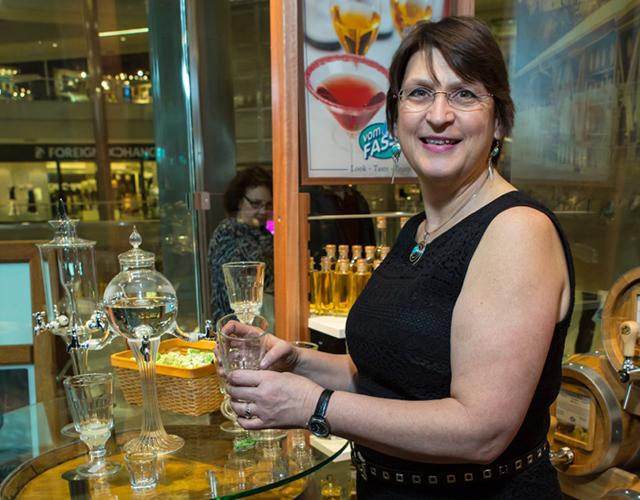 Taste before you buy at Vom Fass specialty gourmet shop