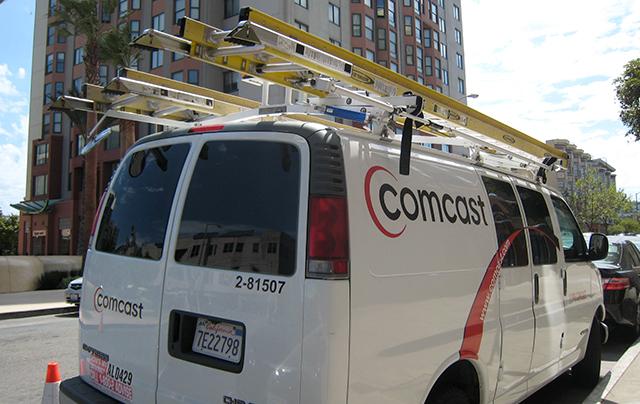 Creative Commons/Titanas
Comcast Vice President for Corporate Affairs Mary Beth Schubert says the company is committed to a “seamless transition” for Twin Cities customers should the merger deal be approved, “with no immediate changes planned.”

Should Comcast’s proposed acquisition of Time Warner and subsequent spin-off of its Minnesota customers into a new entity managed by Charter Communications be approved, local customers face a lot of unknowns.

How would the new entity — tentatively called “NewCo” by Comcast and “SpinCo” by some — be managed? Would its customer service, technology options and pricing packages be comparable? Would the new company be as willing to invest in system upgrades and better Internet service in a market where consumer options are limited at best?

Charter: worse broadband, but better TV for some

Charter’s current presence in Minnesota is already substantial. Some 471,000 households are included in its territories, comprising 1.1 million of the state’s 5.4 million residents, according to the National Telecommunications and Information Administration. Its territories include Duluth, Rochester and St. Cloud, northwestern Twin Cities exurbs such as Buffalo and Elk River and southern suburbs such as Rosemount and Lakeville.

But to those in Minneapolis and St. Paul, it is a virtual unknown.

Ohio-based cable industry analyst Brian Bennett of Bennett Strategic Insights said Charter’s biggest selling point is that it offers standardized pricing nationwide across its platform, with packages actually cheaper than comparable ones offered by Comcast. But, he cautioned, making direct comparisons on price levels are hard to predict since what would be adopted under a wholly new company is unclear.

“From a retail perspective, you could potentially see a price decrease, but under this (NewCo) scenario, you just don’t know,” he said.

“One thing I do know is that Charter is currently making a push to upgrade its HD television service,” he said. “In most markets they offer around 100 HD channels, but now in some markets they’ve gone through a digital conversion and are offering up to 199. From a content perspective, they’re taking steps in the right direction, while Comcast has been pretty static around their 120 channels.”

Conversely, Charter currently doesn’t offer a multi-room digital video recorder, but Comcast does. That, Bennett said, is an example of how a new, hybrid provider may likely opt to keep Comcast’s technical superiority in some areas intact.

Christopher Mitchell of the Institute for Local Self-Reliance, favors community-owned networks, but concedes that locals could take some comfort that Comcast offers access to some of the industry’s faster Internet speeds. “But now we’re facing the prospect of not only being stuck on cable, but of going backwards.”

Comcast Vice President for Corporate Affairs Mary Beth Schubert says the company is committed to a “seamless transition” for Twin Cities customers should the merger deal be approved, “with no immediate changes planned.”

Mitchell offers the most damning assessment for consumers’ futures under a spun-off cable provider.

Under the arrangement, Comcast would spin off 2.5 million of its current customers, including those in Minneapolis and St. Paul, into the new, publicly traded holding firm in an effort to reduce its national footprint and make its $45.2 billion Time Warner bid more palatable to federal regulators.

Charter would own about one-third of the new entity and serve as its manager with shareholders of the merged Comcast and Time Warner owning the rest. Its nine-member board would include three appointed by Charter and six independent directors.

But there is trepidation that a potential Charter spin-off deal would put the Twin Cities’ Comcast customers into (excuse the pun) uncharted territory. It would be the first time two big cable companies would team up to form a wholly new entity.

Says Mitchell, ”I like to think of it as not just getting a new parent, but being a stepchild where you’re going to be sort of at the end of line,” he said. “When this company makes an investment, Charter is only going to get a piece of the action because it will own just a third of it — it will have to share the benefits with Comcast. This is a very bad sign.”

Whatever may ultimately emerge from a hybrid company, it would likely be more of the same high prices for Internet speeds that are insufficient to keep Minnesota competitive nationally, asserts Joe Caldwell, CEO of locally based provider US Internet.

”I don’t think people would be worse off or better off (under a new a company), I just think they’ll just keep paying up the rear end for Internet and we won’t have a lot of choices for those kinds of speeds,” he said. “I don’t see how it could be worse under Charter.”

US Internet has or will offer roughly 20 percent of Minneapolis neighborhoods fiber speeds at prices cheaper than the Comcast-CenturyLink duopoly. USI’s fiber primarily carries traffic for its city of Minneapolis wifi contract; residential fiber service is a bonus for those living next to the lines.

Caldwell says one obvious way for his company to grow would be to offer TV over fiber, and thus be a true competitor to cable. However, Minneapolis franchise rules prohibit that combo unless a company can build out its network to cover 100 percent of the city— a provision meant to discourage “digital redlining” of low-income neighborhoods.

Indeed, USI’s fiber today is concentrated around the wealthier Minneapolis Chain of Lakes, though a few middle-class and lower-income neighborhoods are served.

Caldwell says no one, with the possible exception of Google, is able to meet such a whole-city requirement, and thus USI’s growth prospects are stalled. In Kansas City, where there are no anti-redlining rules, Google is doing fiber on a neighborhood-by-neighborhood basis.

Mitchell believes Google would be willing to come here and meet the every-neighborhood requirement, but no leaders are asking them because they’re afraid of Comcast’s financial and political clout. The Twin Cities, he concludes, are missing a golden opportunity to break the telecom duopoly, even as a Comcast-Charter handoff increases uncertainty.

Don Jacobson is a veteran business writer who has worked for UPI, Minnesota Real Estate Journal, Twin Cities Business, Star Tribune, and others.

What Comcast-Charter switch means for subscribers, and why fiber is stymied