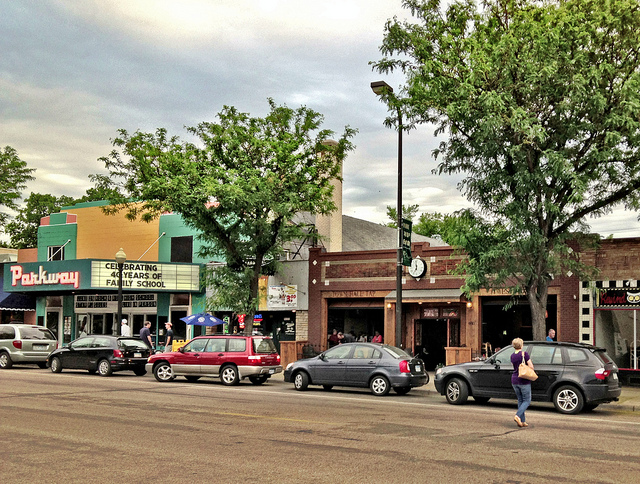 CC/Flickr/Jeff
Town Hall Tap owners chose to build the restaurant at 48th and Chicago rather than in Northeast Minneapolis partly because of the looser 60/40 food-alcohol-sales ratio.

Ever seen a vacant storefront in a Minneapolis neighborhood — maybe one in a struggling commercial node that has languished unused for years — and thought, “That would be a great spot for a restaurant”?

It could be in an emerging part of town where young families would love a foodie joint serving moderately priced but creative casual fare. And of course, it would need to offer a big lineup of locally produced craft beers and ciders as well as connoisseur wines, like local favorites Red Cow, Blue Door Pub and Pat’s Tap.

It would be a win-win, you think: Not only would the owner turn a profit catering to locals, it would help bring vibrancy to the neighborhood, add to the tax base, and spread out economic redevelopment dollars to more parts of the city.

Chances are some restaurateur or commercial real estate broker has seen that same storefront and thought exactly the same thing. In fact, industry pros say they are leaving few stones unturned in their quest to scout out potential locations for new restaurants that capitalize on the gastropub trend.

But in some cases, they contend, those storefronts remain dark because of Minneapolis’ “70/30” rule, which calls for restaurants in residential neighborhoods to earn at least 70 percent of their revenue from food and no more than 30 percent from alcohol. That’s a tough standard to meet when locally made brews can go for $6 per glass.

Restaurateurs have mounted a ballot drive to get rid of 70/30, a 1997 city charter amendment designed to keep neighborhood restaurants from turning into noisy saloons. The Minneapolis Charter Commission has scheduled a hearing Wednesday on their bid to put the issue on the November ballot.

Meanwhile, licensing officials and City Council members are drafting new rules to replace the charter provision once it’s off the books.

Some in the restaurant and craft beer industries say the changes are sorely needed if Minneapolis is to more fully tap into the powerful new restaurant trend.

Andrea Christenson, a retail real estate broker whose clients include some of the city’s hottest restaurateurs, said it’s no easy task to place new “beercentric” eateries in Minneapolis, despite the growing demand from fans.

“It’s so hard to get restaurants interested in this town because our taxes are really high, we don’t have a tip credit and you’ve got this 70/30 thing,” she said. “Most people I know who have a couple glasses of wine at dinner, their bill is 50/50. You need a lot of people who don’t have any alcohol to make up for that. What do you do? Take the drinks off the menu?”

Asked if she has had clients turn down opportunities to expand into Minneapolis neighborhoods with the 70/30 requirement, Christenson said, “Exactly. They all struggle with it.”

When Pete Rifakes, owner of the pioneering Town Hall Brewery in Seven Corners, went looking to establish a beercentric restaurant in a Minneapolis neighborhood a few years ago, he cast a wide net in looking for a location that would work within the city’s alcohol ratios.

“There were a couple of neighborhoods where I knew I wouldn’t even look because of that,” he said of his efforts to set up what eventually became the Town Hall Tap at 48th Street and Chicago Avenue. “We specifically stayed away from parts of Northeast Minneapolis because of the 70/30. We didn’t want to force customers to buy something like an overpriced soft pretzel to get a beer.”

Even the looser 60/40 ratio required at the Chicago/48th commercial node was a major challenge, Rifakes said.

“We eventually settled on a ‘bundling’ strategy, where we bundle burgers and a beer,” he explained. “The time and effort to come up with these things, implement them and set up your (point-of-sale) system is burdensome.”

(As part of the 70/30 negotiations, “60/40” restaurants are also seeking to get rid of their ratio. Because that standard is enshrined in ordinance, it does not require a charter amendment.)

How a replacement law would work

It has eight points, including “expected management responsibilities” for monitoring noise levels and patron behavior. Other details include a new definition of a “restaurant” that better fits the reality of modern gastropubs and limits the bar area in such establishments to 30 percent of the floor space. (You can see the proposed charter and ordinance changes here.)

“I believe the 70/30 and 60/40 food-alcohol ratios are outdated and need to be modernized,” Wilson said. “The economics of running a restaurant are different now than they were 20 years ago. The tools we are adding are really to enable us to get after those few businesses that are problematic. The majority, especially in the 70-30 neighborhoods, aren’t causing us any problems.”

Building on other successful reforms

While restaurant reform could lift nodes and neighbors, it will also aid the craft beer industry, which scored a landmark political victory in 2011 with the passage of the Surly Bill that legalized brewery taprooms in Minnesota.

Clint Roberts, executive director of the Minnesota Craft Brewers Guild and president of the One Simple Plan public relations firm, was instrumental in guiding the Surly Bill through the Legislature despite considerable initial opposition from the Minnesota Licensed Beverage Association.

“I think what we’ve seen is that with legislative advances, the craft beer industry is continuing its growth and evolution,” he said. “When local and state governments are flexible and work with these growing businesses as the categories change, ultimately that should spell success for both. I think (the Minneapolis situation) a prime example of that.”

Only a few years ago, a Minnesota-focused craft beer line-up was a “nice-to-have” for restaurants, but now, Roberts said, “it’s a have-to-have. People are asking their bars and liquor stores to carry them to keep the benefits local for our own economy.”

Christenson notes that even though Minneapolis restaurateurs have sometimes skirted the letter of the 70/30 rule — and regulators have admittedly lessened enforcement as a new solution moves forward — they want to be integral parts of their neighborhoods’ revivals.

Roberts agrees, concluding there’s “reason to be optimistic” a compromise striking a balance between neighborhood noise concerns and easing restrictive alcohol ratio ordinances will ultimately be found in Minneapolis.

Don Jacobson is a veteran business writer who has worked for UPI, Minnesota Real Estate Journal, Twin Cities Business, Star Tribune, and others.