The McKnight Foundation commissioned writer Jay Walljasper to do a series of reports looking at the prospects and challenges in Minnesota’s 80 counties outside the metro area. This series of four articles is excerpted from the first report, focusing on Southeast Minnesota.

Rochester qualifies as the Green Bay Packers of health care — a small city that more than holds its own in the big league of America’s fastest-growing industry. And the world is taking notice. Livability.com recently rated Rochester America’s Second Best small-to-mid-sized city to live in (Madison, Wisconsin won No. 1). U.S. News and World Report named it one of the 10 best places in the United States to grow up.

But local boosters are not basking in their sunny press coverage. They’ve launched the $6 billion Destination Medical Center (DMC) initiative (including $327 million from state taxpayers) to ensure that Mayo Clinic (plus a growing cluster of other health care companies in town) stays on top as a health-care leader.

The goal is to attract talented workers, emerging businesses and new investment at the same time as continuing to serve patients from all over the world who now have an increasing number of health-care options. The plan maps out how to turn the city into a hub for bioscience firms, a center for health-related education and a national leader in wellness services (to match Mayo’s world-class health treatment). Downtown Rochester is to become the epicenter of this economic boom with a dramatic transformation in cultural and entertainment offerings, recreational and community amenities and transportation infrastructure.

The Mayo Clinic already employs more than 30,000 people in Rochester, making it the state’s largest private employer. The Destination Medical Center could add another 40,000, according to Rochester Mayor Ardell Brede, who believes the city’s population might double to 200,000 over the next 20 years.

Still, Rochester has a long way to go as a dream destination for top-of-the-class M.D.s, Ph.D.s and registered nurses fresh out of school. The millennial generation, which will replace retiring baby boomers in the next few years, is the first in U.S. history who report they would choose a great town over a great job.

“The people who will fill these new positions have many choices of where to live,” notes Rochester/Olmsted County Planning Director Mitzi Baker. “Rochester must be competitive with other regions to get the talent pool we need here.” Besides investment and infrastructure upgrades, she says it’s critical for the city to offer “a strong sense of place, making us somewhere where people really enjoy being.”

DMC sets in motion a new future for Rochester’s downtown as one of the most economically vibrant, densely settled districts in the Upper Midwest. “We’re already locked in with traffic,” says Jeff Ellerbusch, analysis and planning supervisor at the Rochester/Olmsted County Planning Department. “We’d have to tear down a lot of the city to get more cars in here.”

What’s on the drawing board is more transit (including streetcars, bus rapid transit and high-speed rail to Minneapolis-St. Paul), more bikes (including a bikeshare system and protected bikes lanes separated from traffic) and more walking (including more pedestrian-friendly streets). Some changes can be spotted already. Rochester sports more than 100 miles of bike trails, 23 miles of on-street bike lanes, 514 miles of sidewalk, and new pedestrian public spaces, all of which are slated for expansion. 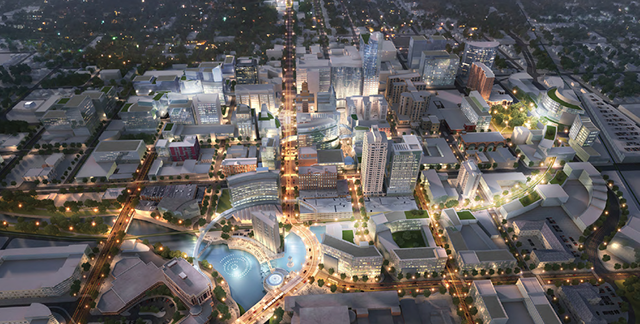 Destination Medical Center Development Plan
DMC sets in motion a new future for Rochester’s downtown as one of the most economically vibrant, densely settled districts in the Upper Midwest.

The Destination Medical Center plan draws plenty of criticism — some from folks who fear Rochester will lose its small-town charm, but also from those who think it is too narrowly focused on downtown. Jeff Gorfine, an educator in the Rochester Public Schools asks, “Where is the planning to help the smaller communities in terms of transportation, housing and land use? No money was put into the surrounding communities to look at what this means — negative impacts, positive impacts, missed opportunities.”

The Southern Minnesota Initiative Foundation (SMIF) sponsored a meeting last fall attracting more than 100 citizens and leaders from 30 nearby towns to raise concerns and voice ideas about spreading DMC’s benefits more widely throughout the region. They decided to move forward on four fronts with help from SMIF:

Two towns with different strategies of capitalizing on DMC

One nearby town is already positioning itself to capitalize on the Destination Medical Center: Pine Island, just a couple exits north of Rochester on the highway to Minneapolis-St. Paul.

In fact, one of those exits is brand new, built by MnDOT to accommodate the 2,000-acre Elk Run bio-business park and residential community emphasizing wellness and environmental sustainability, planned by a California company. Set along the Zumbro River, the new neighborhood will embrace healthy living with walking and bike trails, nature preserves, a fitness center, sports facilities, medical spa, a wellness education center and easy access to the Douglas State Trail running between Pine Island and Rochester.

“It’s a place where you can live and recreate without getting into your car,” explains Pine Island mayor Rod Steele. “Europe has doing things like this for years.”

While this kind of ambitious, forward-looking thinking is crucial for the future of Minnesota’s small towns, Pine Island and the state of Minnesota have nothing yet for their investments. While the developer has sunk $2 million in sewer and water service to the site south of town and local voters passed a referendum to build a new elementary school there, nothing has been built except for the highway interchange six years after the Elk Run project was announced.

A more homegrown approach to capitalize on DMC’s economic growth is under way in Plainview, 17 miles northeast of Rochester, where retired banker Dean Harrington is launching Front Porch Neighborhoods to fix up and build homes that preserve “the character of mature, established neighborhoods” in small towns. A long-time community champion, Harrington says he is exploring “what we can do as local investors on a small scale with limited assets.”

Take another look at Mayoville

While some scoff that Rochester will never become more than Gopher Prairie with a famous hospital, there is already a more cosmopolitan spirit in the air. Folks who haven’t been to Rochester for a while might be shocked to find hipster-friendly apartments, hip-hop artists at the gritty C4 creative space, pedestrian bridges over the river, a food co-op rivaling any in South Minneapolis, swank bistros, local foods on restaurant menus and interesting-looking dive bars (which were probably there all along but who knew?). The riverfront is coming alive with parks, trails, the Rochester Art Center, the Rochester Civic Theatre and the Mayo Civic Center auditorium.

Mayor Brede admits that the changes sweeping Rochester are creating some tension, but adds, “I think 98 percent of the cities in the country would love to have this challenge.”

Jay Walljasper writes, speaks and consults nationally about how to create healthier, happier communities. His website:JayWalljasper.com.