The four founders of the Twin Cities’ latest craft brewery named it “Modist” as a play on the word modify. To them, it connotes their desire to break from the conventional, to modify current brewing techniques, products and culture.

They want to be different.

But when it comes to standing out in an increasingly competitive business, they had us at growlers. More specifically, a lack of growlers. As in, when it opens sometime in January, Modist Brewing Co. will not offer the ubiquitous brown glass jugs that have come to symbolize craft brewing in Minnesota.

No growlers? Is that even allowed?

It is. If customers want to take some of the product away from the North Loop warehouse being transformed into a brewery and taproom, the staff will be happy to fill a .750 liter aluminum can about the size of a Foster’s “oil can” — a vessel called a “crowler.” So as not to be fanatics about it, they will fill any 64 ounce glass jug brought in from outside, as long as it’s empty and clean, with the emphasis being on clean.

But they’d rather not. They just don’t want the expense and the mess and the hassles of growlers. And their loathing of the jugs comes naturally: most of them began in the craft brewing world at the bottom rung, washing and filling growlers over and over and over again.

The Modist philosophy goes well beyond growlers, of course. In fact, where they place their thoughts about the means of distributing their beers is way below their attitude toward, well, their beers.

“It’s really about doing things differently,” said co-founder Eric Paredes. “It’s about making beers that don’t necessarily currently exist. It’s about customizing equipment that allows us to use ingredients that normal brewing equipment don’t allow you to use.”

“It all started from not knowing all the boundaries of beer,” said head brewer Keigan Knee of his early tries at home brewing. “I was a novice about different beer styles and what you can and can’t do.”

Early on, he and his partners, two of whom are also his housemates, would enter their home-brewed beers into competitions where they would receive good comments but few medals because they didn’t fit into the accepted styles such as lager, pilsner, India pale ale and stout.

Said partner Kale Anderson: “When it’s 100 points and you lose 15 of the 20 points for style, you’re pretty much out of the awards right away.” Once they started entering into the broad “specialty beer” category, they started winning.

“There’s so many limitations on all these styles which is great because that’s what’s out there now but there’s more to be done other than the mentality of, ‘Oh, there’s something hoppy, I’m gonna make an IPA or a double IPA. You can do a lot more than that. Instead of focusing on how you have to fit inside this little box, it’s to do away with the box, let’s build something from scratch with flavor first instead of style first.”

‘We want you to understand you’re in a brewery’

All four founders have experience in the region’s craft brewery boom. Three of the four — Anderson, Knee and John Donnelly — grew up together in Delano. They shared an interest in home brewing (as well as a home), a passion that pushed them toward Midwest Supplies in St. Louis Park, a homebrewing and winemaking retailer. Many of the people who hung out there moved from home brewing to craft brewing at some of the early craft breweries.

Most recently, Anderson has been the packaging manager at Lucid Brewing. Donnelly was at Lucid as well, first in on-site sales and then in packaging. Knee was the head brewer at Dangerous Man, joining founder Rob Miller there when it opened in 2012.

Paredes came out of corporate marketing. After a stint in the California wine business working for E & J Gallo he moved to Minnesota five years ago for family reasons. Once here, he met up with Knee as a weekend volunteer at Harriet Brewing, when he wasn’t working for companies like Land O’ Lakes. More recently, he was at the Carlson School of Management as director of product development in the executive education department.

“It’s kind of interesting that my winery ended up being a brewery,” Paredes said. 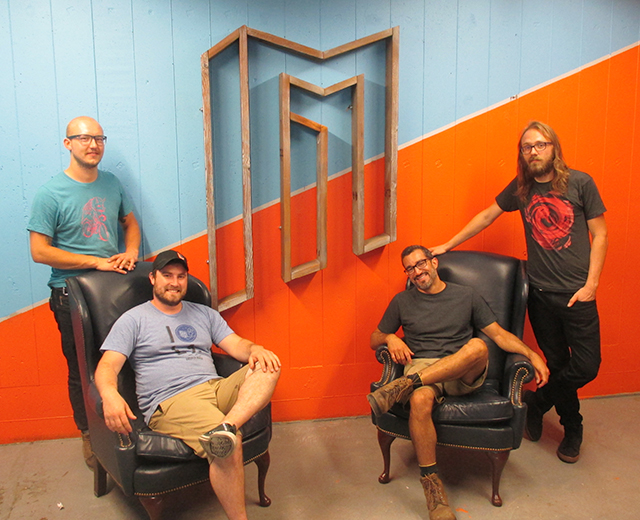 The start-up is a million-dollar proposition, with three-fourths of the money coming from investors and the rest from a Small Business Administration loan. The 16,400 square foot warehouse will hold a tap room with a deck plus all brewing, packaging for cans and kegs and refrigeration.

The taproom itself will open up to the brewing area with only low walls in between. That is a result of their hopes for letting curious customers see the operation and talk to the brewers about the process and the recipes. “We want you to experience the brewery and understand that you’re in a brewery,” Paredes said.

The philosophy of thinking less about beer styles and more about experiences might lead to some puzzled customers who have become used to entering a craft brewery knowing they could get that IPA or pale ale or pilsner. Being different is a noble goal. Though when someone says something is “different” in Minnesota, it isn’t always a compliment.

The solution, they say, is to have a conversation. Knee says if a customer says he or she wants an IPA he might say, “Oh, you like hoppy beers. Try this. This is our hoppy offering.”

“It’s the knowledge that we transfer onto the consumer, not just the styles of beer but what makes a good beer and what makes a not-good beer,” Anderson said. “We want a consumer who comes in to learn at least one thing while they’re in here. They could then take that knowledge to other breweries and know if they’re making good beer as well.”

“The more you know the better decisions you can make,” Knee said.

Wait. Conversations? With strangers? Isn’t that something else that makes some natives uncomfortable?

Knee promises they won’t be threatening or come off as beer snobs. “It’s just talking to your fellow man.”

Paredes knows that there are many customers who don’t want a lesson — or a conversation. The tap room is being designed so that part of the room is set up traditionally with tables and chairs for friends to gather and chat. But another part will be an education area to encourage interaction between the brewers, staff and customers.

So what will the first beers be? One will be what Knee calls a sour mash beer or gateway sour that he says won’t be “too abrasive to anyone who hasn’t had a sour beer before.” The second will be “the same idea only on the hoppy side. Not a sour but a hoppy beer not focused on bitterness.” Both will have alcohol levels of less than 5 percent.

While there will be a division of expertise once they open, there is less so as they prepare the warehouse for contractors to arrive. They’re all helping with some light demolition, filling plastic bins with debris (though some of the wood went into a version of their logo — a blivet-like block letter “M”).

Paredes said he was up on a tall ladder pulling down some materials from the rafters. He was sweaty, covered in “30-year-old dirt, teetering on the brink of death” when he had a thought about his previous life in the corporate and academic worlds.

“My colleagues,” he recalled thinking, “are writing a Powerpoint presentation right now. And I could not have been more ecstatic to be up there.”

Minneapolis’ next craft brewery wants to be different. Just not ‘Minnesota different’