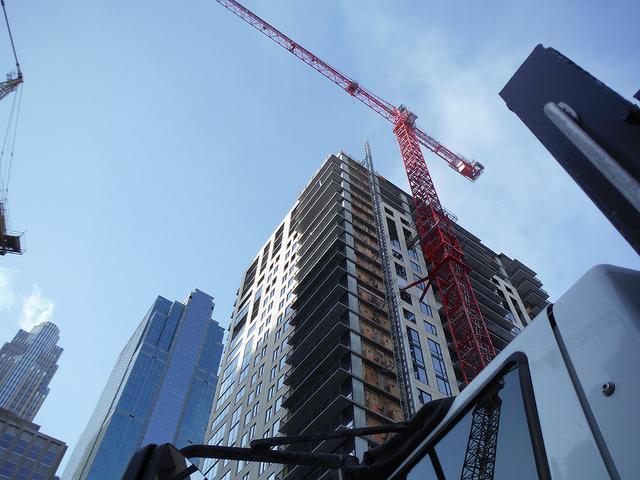 CC/Flickr/Ruin Raider
Minneapolitans can be forgiven if they feel like they are living in a construction zone.

Promptly at 7 each morning, construction workers start noisily digging and hauling dirt at the large open pit outside my window. Their project, due to be completed in 2016, is The Encore, a 122-unit luxury apartment complex in downtown Minneapolis that will come complete with stylish amenities like a dog wash and a yoga studio.

Only a few blocks away crews are banging away at similar developments: Latitude 45, a 319-unit apartment building on Washington Avenue and the 195-unit Edition on South 4th Street.

Minneapolitans can be forgiven if they feel like they are living in a construction zone. The Encore and its pals, after all, are only the more recent manifestations of a boom in downtown apartment construction that’s been going on for the past few years. Since 2011, according to Finance & Commerce, 11,051 apartments have come on line in the metropolitan area. About 30 percent of those have risen in the two downtowns.

In Minneapolis, where forests of cranes loom over the streets, the numbers are particularly striking. Brent Wittenberg, vice president at Marquette Advisors, a real-estate consulting company, says developers added 1,100 apartments downtown in 2013 and 900 in 2014. He expects another 1,080 this year and 560 more in 2016. Some 2,000 are proposed for the following year, although it’s likely that some will never break ground, he says.

As the saying goes, we are not alone. “The State of the Nation’s Housing 2015” from the Joint Center for Housing Studies of Harvard University reports that multifamily construction last year soared to 360,000 units, more than in any year in the 1990s or 2000s. Some 90 percent were apartments, rising to accommodate demand from older and wealthier households who would normally own, not rent. Developers and the lenders and investors who back them are betting that endless hordes of millennials and empty nesters who don’t want to buy (or can’t afford to) will fill the burgeoning units.

As thrilling as any boom can be — generating more jobs, more spending and presumably more prosperity — almost the minute it’s detected, there comes the worry about whether or when it will turn into a bubble and collapse. And so it is. Only about 20 minutes after the current surge in apartment building got under way in 2013, Burl Gilyard wrote in Twin Cities Business: “If residential real estate is the ultimate business roller coaster ride, full of exhilarating climbs and stomach-churning drops — how long until the screaming starts?”

Generally, little moans of fear start to be heard when a metric called the vacancy rate rises. It’s a pretty simple concept. You take the total number of unoccupied apartments in a circumscribed area, then divide by the total number of apartments in said area, period. If the rate is 5 percent, the market is considered in equilibrium (though more about that later). Five percent supposedly accounts for renters’ normal movements in and out. Below 5 percent, a market is considered “tight.” If the vacancy rate rises substantially beyond 5 percent, well, that’s not definitive proof of a glut in the market, but developers and lenders contemplating a new project may feel a scream rising in their throats.

Not all vacancy rates are alike, however. For starters, analysts don’t collect data in exactly the same way, nor do they necessarily collect the same data. For example, Wittenberg of Marquette Advisors says his company has a database of buildings over 20 units in size — about 160,000 units (including about 40,000 low-income units) for the Twin Cities seven-county metropolitan area. The numbers come in by telephone, email and fax, often from large building owners and management companies. Mary Bujold, president of Maxfield Research, a Twin Cities research analysis company, collects data mostly by telephone on 290,000 units in the metro. Buildings vary from 25 to 500 units.

Reis, a national real estate data service based in New York, includes multifamily properties of 40 units or more in all states except California and Arizona, where the number is 20. Where they get the information they do not say. The company, according to a spokesman, also has “a dedicated team of New Construction analysts that monitor projects under construction, to ensure that we capture any changes in inventory growth accurately.” MFP in Houston culls data from apartment management software sold by its parent company and covers any buildings over 5 units. “We have 50 years of tracking the market,” says Greg Willett, vice-president of research and analysis.

National companies generally capture only metrowide vacancy rates. For most builders, investors or renters, what counts is what’s going on at the neighborhood level. More granular information comes from local research companies. But even among those there are variations. Again, Marquette Advisors focuses on buildings with more than 20 units. Gina Dingman, president of NAI Everest, a Minneapolis firm that advises commercial real-estate investors, won’t reveal the source of her data for fear of losing her competitive edge, but generally counts projects of over 50 units.

The size of the development counted makes a difference. Studies have shown that landlords of smaller buildings want to keep their units occupied no matter what. They’ll sacrifice the amount of rent they collect simply to get a breathing body occupying the premises. (They can always hope to raise rents later, counting on tenants’ natural human desire to stay put.) In contrast, owners of large buildings have a tendency to let units go empty until they find a tenant who will pay the freight.

I know, I know, 0.2 or 0.3 percent one way or another sounds like a smidgeon of a difference — but it’s one that amounts to about 2,400 to 3,600 market-rate apartments around the metro. And to a developer planning to add, say 150 units — and seeing his or her competitors each adding another 150 units — the difference can be meaningful.

Another factor that can change the vacancy rate: new buildings. More specifically: When should they be counted? After all, on the day they open for business, they may be almost 100 percent empty; adding so many unoccupied units would, of course, change the vacancy rate. Analysts take a variety of approaches. Dingman of NAI Everest unforgivingly counts them immediately. Wittenberg gives them six months to lease up. And Mary Bujold of Maxfield Research generally adds a building to the inventory of apartments “when it stabilizes,” by her definition, when it is 93 to 95 percent full. But if it rents up faster, she may include it more quickly.

‘We are playing catch-up’

Despite the differences in the various models, the rates seem to converge. They also suggest that the Twin Cities’ boom looks to be far from bust. Historically, “Minneapolis is up there with New York and San Francisco as having one of the tightest vacancy rates,” says Willett of MPF Research. “The vacancy rate has run about 3 percent. And that’s what it is now: 3 percent.”

The reason for the low rate, he says: “Lack of rental product.” We simply have not built that much multifamily housing in the past. Wittenberg of Marquette Advisors agrees. “We are playing catch-up” he says.

Downtown Minneapolis is another story, however. According to NAI Everest, the vacancy rate there is 8.3 percent. Marquette Advisors had not at press time calculated its second quarter vacancy rates, but for the first quarter, it registered 8.8 percent for downtown buildings. Both would be well over the so-called 5 percent equilibrium.

But about that 5 percent. Eric S. Belsky, now director of the Consumer and Community Affairs Division at the Federal Reserve System, wrote in a paper for the National Association of Homebuilders way back in 1992 that it is simply “an idealized rule of thumb,” used by developers, investors, banks and even the government. But, he added, “comparing observed vacancy rates with idealized rules of thumb can end up distorting conclusions about the adequacy of supply.”

Equilibrium, Belsky wrote, varies by area and the type of rental units available, how often units turn over, whether the landlords are small or large operators. Again, in an area like downtown which is dominated by big landlords, a 7 or 8 percent vacancy rate may not be all that alarming. And, Bujold says, “We’ve had a lot of construction, but so far, the absorption has been quite strong.” Absorption is the speed at which units rent, and Wittenberg estimates that the downtown Minneapolis has sucked up about 2,500 apartments in the past two years.

Buildings do seem to be filling up. I looked at a dozen downtown developments built in the last few years, and, except for a couple of outliers, most had vacancy rates under 10 percent. Typically, when landlords become desperate, they offer rent concessions or rewards like a weekend in the Bahamas or a flat-screen TV. I found only one building openly offering discounts to would-be renters — LPM Apartments, the lozenge-shaped 36-story development near Loring Park. It is granting tenants willing to sign a 14-month lease for a 738-square-foot one-bedroom apartment two months of free rent. The tab: up to $1,815 per month, plus, says its website, “an additional monthly Utility & Service Amenity fee which includes the cost of heating, air conditioning, water, natural gas for cooking, and natural gas for the operation of the clothes dryer.” (Silly me, I thought the rent included all that.)

Built for the ‘high end of the market’

In fact, those downtown rents keep rising ever higher. And, in a couple of years, there may be a dearth of renters — even those anxious to be downtown — able or willing to pay, say, $1,531 a month, what Wittenberg estimates is the average for a one-bedroom apartment. A tiny one, at that. If the Twin Cities’ job growth tails off, screaming may lie ahead.

Already Ryan Severino, director of research for Reis, the national real estate data service, says he is surprised that the screaming hasn’t already started, at least in some cities. He headed his comments on 2015’s second quarter “Armageddon Postponed” and writes that while a huge number of units are coming on the market, an estimated 230,000 this year, renters continue to gobble them up. But, he warns, “the pipeline remains incredibly robust and the market is only delaying the inevitable” — a moment when there will more apartments than people who will want or be able to rent them.

Affordability is certainly an issue. Most of the apartments now rising here and across the nation are catering to the upscale among us. According to the Harvard report, “new units are primarily built for the high end of the market. In 2013, the median asking price for newly constructed multifamily units was $1,290, equivalent to about half of the median renter’s monthly household income. At that rent level, over two-thirds of today’s renter households could not afford this new unit at the traditional 30 percent income standard.”

Do the Twin Cities really need this many luxury apartments?