Thursday evening, Breen and the rest of his staff at the bike shop formerly known as Calhoun Cycle in Uptown took turns shoveling dirt over a small aluminum Calhoun Cycle sign that once hung in the store and now rests at the bottom of a planter.

The ad-hoc funeral served not only as a celebratory ritual for the newly renamed Perennial Cycle shop, but as a symbolic way of putting to rest the legacy of John C. Calhoun, one of America’s most aggressive segregationists and proponents of slavery.

“He fought his entire life to protect the rights of slave owners,” said Breen. “That’s what he was all about, from beginning to end, it’s what he tried to do. And as things were getting whittled away from him, he didn’t slow down. It came down to, literally, a county: ‘We can still have ’em here!’ It was all about building up wealth.”

Breen, who has owned Calhoun Cycle for over 20 years and who describes himself as “your typically white entitled male that had no clue; really, really clueless about the racism that has gone on over the years,” admits to having undergone an awakening in the last few years, as the movement to rename Lake Calhoun gained steam and as the Black Lives Matter movement has inspired soul-searching and demanded institutional changes from white allies.

“Three and a half years ago, my wife did a civil rights tour in Alabama and Tennessee, mostly, and it just opened our eyes to a lot of things that we had been unaware of, and the level of white supremacy that continues now,” said Breen, a father of three daughters. “It’s embedded in our laws, it’s embedded all over the place, and [John C. Calhoun] is the one who stands tall in that white-privilege world. His connection to Minnesota was designing Fort Snelling. He spent next to no time in Minnesota.”

While members of the Minneapolis Park & Recreation Board and Department Of Natural Resources drag their feet on renaming Lake Calhoun, Breen, who has owned Calhoun Cycle for over 20 years, is moving forward — albeit it not without some blowback.

“When this [Star Tribune] article about us changing the name came out, there were all these comments. And they’re just mean. Nasty, nasty comments. And I will say, it hurt. I didn’t even know where to put that; humanity was lost on me. But that was on the Strib’s page, so they’re all anonymous. But then we put it on our Facebook page, and people were much more supportive.

“And the whole year we’ve seen support. We had our best year ever, we had a lot of support from people we’ve known for a long time, and we had new people coming in the door and some would say they were supporting us directly because of what they saw us doing with the name.

“But when this event came up, I put the poster on our Facebook page, and we immediately got a comment like, ‘More leftist politically correct B.S.,’ which we deleted. Then a longtime customer of ours said, ‘The day that this happens is the last day I will be a customer of yours.’ And I didn’t see that coming. That hurt. But it was totally something I could handle. I said, ‘Thanks for all the years with us, John. I’ve got pictures of you 15 years ago doing a fun ride with us, sorry to see it end.’ And that was it. I don’t necessarily feel badly for him, or feel badly for me, we just have a difference of opinion. I think he’s wrong, but …” 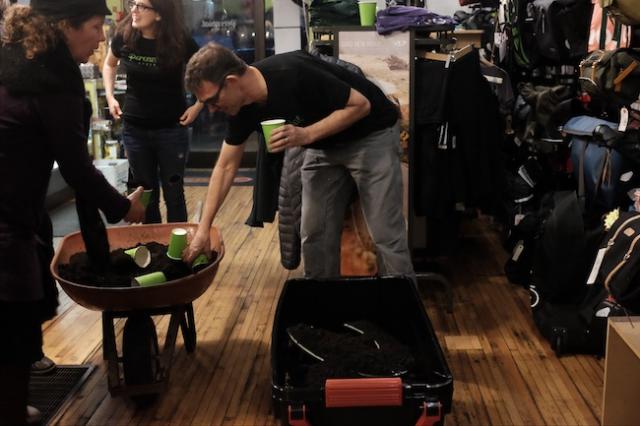 Photo by Martha Garcés
Breen scoops a ceremonial first cup of soil in the planter burying a sign with the former shop name.

“I really wanted ‘grace’ or ‘freedom’ in the name. I’ve got a grandma named Selma and I thought ‘Selma’ would be nice, but ultimately I’m a white guy who grew up in a little Norwegian community in Minnesota, and it just felt out of place. So then when I realized it was more about getting rid of Calhoun, it became a lot simpler.”

As simple as burying the past and Calhoun in a planter?

“I thought it would be fun to just do something to put it away and move forward,” he said. “You know, bury it. I would think that a little bit at a time, we can start chipping away at [institutional racism]. I think there’s opportunity out there.” 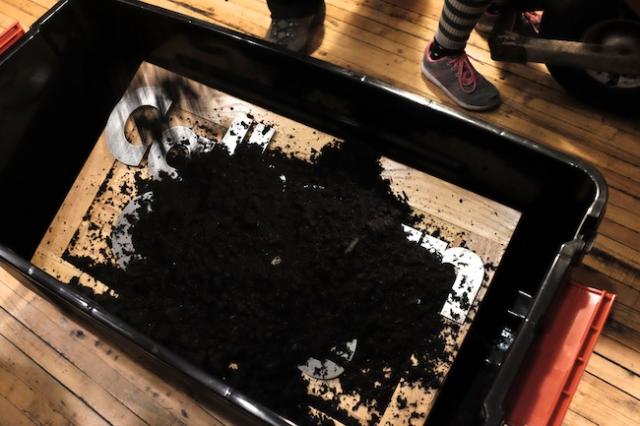