Whether Minnesotans care to admit it or not, Hawaii is the true capital of Spam.

We may have a brand new Spam museum to show for ourselves, but for Hawaii, Spam is no mere novelty. On average, Hawaiians consume more than five cans of the stuff per person per year — more than any other U.S. state.

Waikiki is about 4,000 miles from Spam’s hometown in Austin, Minnesota. How did this iconic Minnesota-made ham-in-a-can gain such a foothold on a tiny group of islands in the middle of the Pacific?

Spam in the Pacific

Spam’s popularity in Hawaii has a lot to do with its durability. It’s a nonperishable meat product made of pork, water, salt, sugar, potato starch and sodium nitrate that does not need to be refrigerated — or even cooked — to be safely eaten. (The name “Spam” is a portmanteau of “spiced ham.”)

“This was a portable, convenient product that you could make many different ways for breakfast, lunch or dinner,” said Nicole Behne, marketing director of legacy brands at Austin-based Hormel.

After the war, many of the troops left, but Spam stuck around in Hawaii and other parts of the Pacific — more so than other locales (though it’s also popular in the United Kingdom). It just so happened that compact, non perishable Spam was convenient for Hawaiians, who lived on isolated islands that subsist on a lot of expensive, imported food.

“It’s easier to import shelf-stable meat than it is to import livestock, which could be destructive to Hawaiian conservation efforts — and you have to feed them,” said Shayna Inzunza, a research analyst at Technomic, a research and consulting firm focused on food. 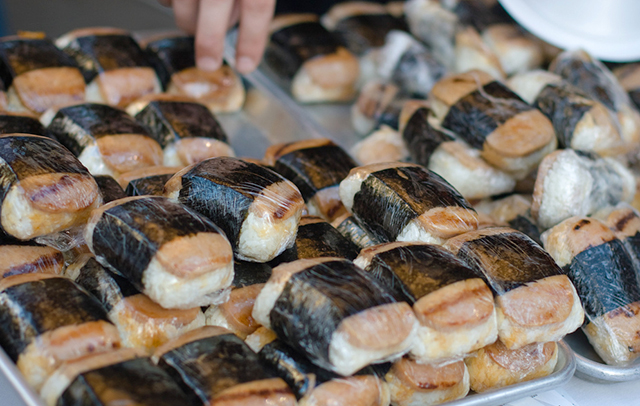 Creative Commons/Kanaka Menehune
Spam musubi for sale at the Spam Jam in Waikiki.

Because of the product’s popularity, it’s not uncommon for Hawaiian stores to stock shelves upon shelves of Spam, Behne said: a veritable wall of Spam. And Hormel has even created new flavors — teriyaki and Portuguese sausage — specifically for the Hawaiian market.

“I think the people in Hawaii use it as part of their everyday more frequently than we have on the mainland,” Behne said.

Spam on the menu

In the years since WWII, Hawaiians have dreamed up hundreds of ways to incorporate Spam into their diets.

“Who knows, maybe some mainland folk (not transplanted locals) will discover this book and realize that there is more to Spam than baked Spam with brown sugar,” she writes in the preface. Not out of recipes after 160 pages, Corum later wrote a follow-up, “Hawai’i’s 2nd Spam Cookbook.”

Commonly sold at restaurants and convenience stores as a quick snack, Spam musubis — a slice of Spam atop a block of rice, wrapped up in a piece of seaweed — are perhaps Spam’s most ubiquitous incarnation in island cooking.

In Hawaii, 7-Eleven stores go through about 70,000 musubis per week, Behne said.

Peter Napathalung, senior manager of market insights at Technomic, said Spam probably owes a great deal of its notoriety in Hawaii and the Pacific to the fact that it complements the local cuisine’s flavor profile. It can be found in both high-end and everyday fare (Spam has been on the menu at McDonald’s restaurants, paired with rice and eggs, in Hawaii since 2002).

Take Spam fried rice, which Inzunza and Napathalung both said is their favorite Spam dish.

As consumers move toward local, fresh and organic food, Spam’s foothold in Pacific cuisine might be what’s kept it relevant for all these years, Napathalung said. Even on the mainland, Spam is rarely seen on menus outside the context of Hawaiian or Asian food — unless it’s on the menu as a novelty — and even that’s rare, he said.

In Minneapolis, Spam has come full circle. Cooked Hawaiian style, it can be found on the sushi menu at Midori’s Floating World Cafe on East Lake Street, right back here in Minnesota, the home of Spam.

“Hawaiian style grilled piggy,” the menu says. “(Go for it!)”

It’s not the most popular item, said John Flomer, who co-owns the restaurant with his wife, Midori, but it’s been on the menu since the restaurant opened in 2003 and holds its own: even with very thin slices, the restaurateurs still manage to go through a can or so of Spam every week.

It’s kind of a novelty, Flomer said — probably as many people love it as hate it. 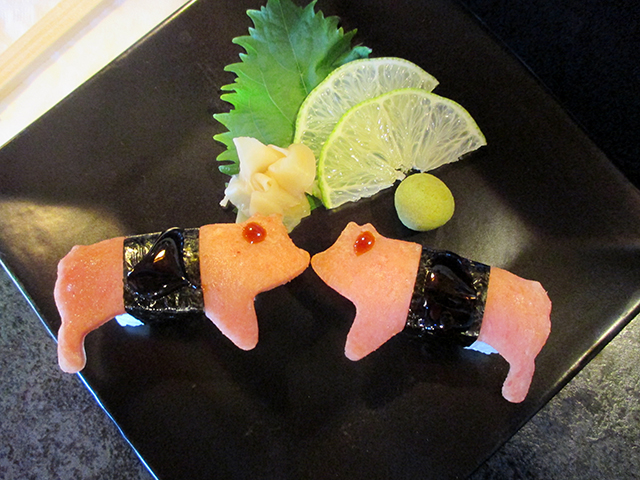 “A lot of people just make the eww face, but you know, I kind of grew up on that stuff,” he said.

Flomer remembers his mom making fried Spam sandwiches. She’d fry the Spam, then dip the bread in the grease before serving, sometimes covered in cheese.

“I don’t eat meat anymore, but I have fond memories of it,” he said.