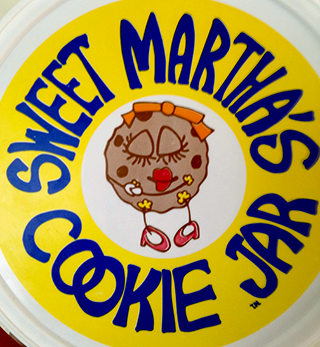 We need to talk about Sweet Martha’s cookie pail.

You know the one. The cookie pail, available at the Minnesota State Fair, holds at least four dozen fresh baked chocolate chip cookies and costs $16. Each year you Instaface your excitement about Andrew Zimmern’s excitement about the Fair’s new balsamic and strawberry compote-filled miso waffle cone “Carpe Diem.” But in the end, you eat the bucket of cookies, before you even make it back to the park-n-ride lot, a bucket that was supposed to last a week. No wonder Sweet Martha’s Cookie Jar is always, always, the highest grossing food fender at the fair, selling about 1 million cookies — each day.

But have you ever looked — really looked! — at the cookie pail design that has not changed since its conception, which probably predates your conception? For 28 years, this cheery looking triptych has escaped scrutiny. But look at it. Look and you’ll see a fever dream scenario more in line with a sci-fi short story than the nation’s happiest get-together.

First, there is the Martha cookie, standing on the raw materials — a clear health code violation. With perversely out-of-place red lipstick, the cookie barks orders down at the horror scene transpiring before her, a clipboard tucked underarm, the calling card of an autocrat.

Workers are literally stacked atop each other as they struggle to lift flour into the mixing bowl. Meanwhile, struggling without a break, other line workers stir the ingredients and shovel an unanimated blob onto a sheet. From there, a cook directs the sheet into an oven, from which emerges a newly alive cookie. Yes, Martha has devised a labor system by which cookies are forced to bake their own indentured replacements.

“They asked me to do a little design for the bucket,” said Tom Stack, who created the bucket’s design for “Sweet Martha” Rossini Olson and her partners. “So I sketched up a little deal, you know, depicting how the cookies were made. Frolicking around and doing their thing.” 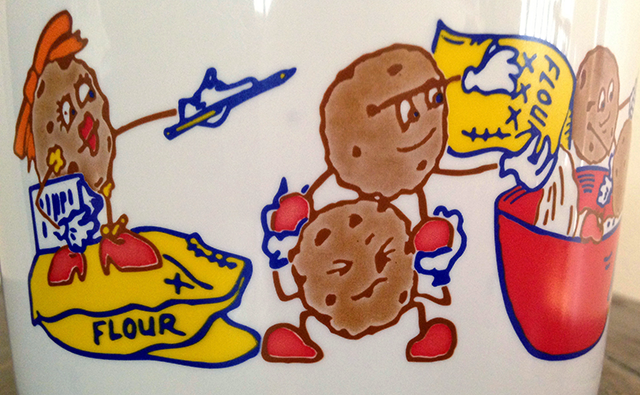 Photo by Abe Sauer
The beginning of the story on the side of the Sweet Martha’s Cookie Jar pail.

It was 1988. Sweet Martha had introduced the cookie pail two years earlier but wanted a more fun design. So they called on artist Stack, as Martha had when she first created Sweet Martha’s Cookie Jar in 1979.

“It’s very deep. Kinda profound actually,” said Stack when asked about his cookies-baking-their-replacements design. Stack says that, for the record, the chief cookie Martha “is supervising.” Stack says the design came about through his own frivolous imagination. “There was no consultation. I went for it. I’m not sure how much thinking was going on.” 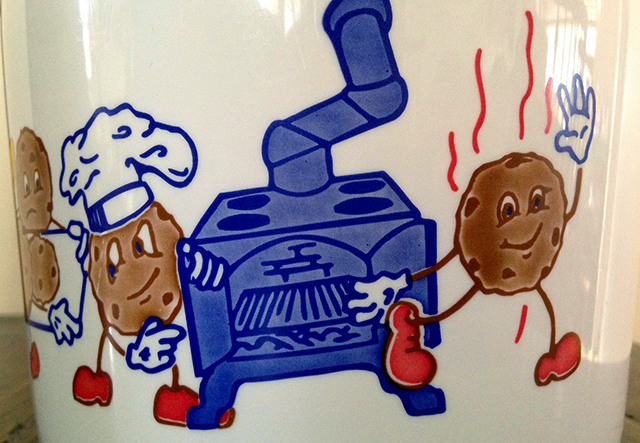 Photo by Abe Sauer
The end of the tale on the side of the Sweet Martha’s Cookie Jar pail.

Well planned or not, Stack’s now iconic Sweet Martha’s designs have landed in the hands of millions of fairgoers. It’s a record many professional package design artists would envy. The Sweet Martha Crew regretted to say they had no idea how many pails had been sold over the years.

And Sweet Martha’s pails also often live a second life long after the fair. Sandbox play buckets. A traveling first-aid kit. Lego receptacle. Sidewalk ice-salt storage and shaker. Indeed, in 2010, when Sweet Martha’s first joined social media, the company held a “Tale of the Pail” contest calling for photos of creative post-fair pail use. The winner was a woman who used her cookie pail for knitting project storage. (Note: The brand always refers to it as a “pail,” not a “bucket” nor an “oh-god-is-that-thing-really-empty-already?!”) 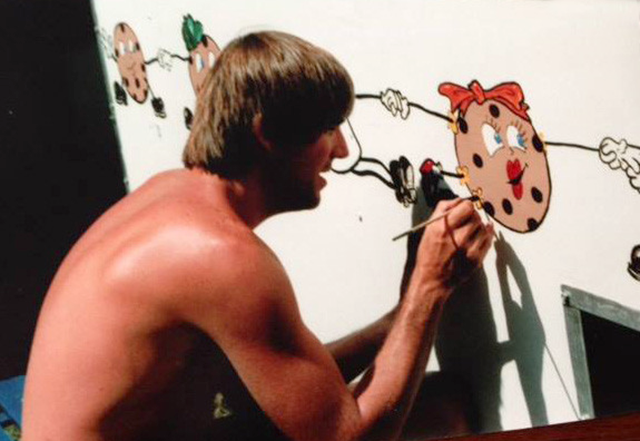 Courtesy of Sweet Martha’s
Tom Stack, in 1986, painting anthropomorphized cookies on the side of a State Fair stand.

“The first booth they had was tiny thing,” Stack says of Sweet Martha’s first State Fair cookie shack, unveiled in 1979. “It was a plywood contraption and I painted the original Sweet Martha’s designs on it in my basement” before it was assembled at the fairgrounds. Over the years, Stack says he painted odds and ends for the brand but its recent expansions have used more advanced, fabricated work. A University of Minnesota art major, Stack says, “Martha was my only ever client. I’m on permanent retainer.”

“Whenever I go now, I just stand in awe of that operation,” he says. Stack says he hasn’t been to the fair this year yet but that he enjoys pointing the pail design to his kids and grandkids. “I did those drawings,” he tells them.

The original sketches are today framed and hang at Sweet Martha HQ. And Martha and partners say they don’t plan to change it.

Abe Sauer lives in Rochester. He is the author of the best-selling Minnesota children’s book “Goodnight Loon” amongst other worst-sellers.

Abe Sauer has written about marketing and politics for Esquire, The Atlantic, Brandchannel.com, CEO CIO Magazine (China) and The Awl. He is also the author of the less serious books ‘How to be: North Dakota’ and ‘Goodnight Loon.’

We need to talk about Sweet Martha’s cookie pail design