For years, skeptics, newsies and denizens of online forums watching the burgeoning craft beer scene in Minnesota have been saying the growth in breweries could be unsustainable. They speculate we’re in a beer bubble; and that the competition could drive a bunch of breweries out of business.

That hasn’t happened yet, but the past year is unlikely to change those people’s convictions that there’s froth in the market. Craft beer boomed in Minnesota in 2017, with more breweries opening over the course of the year than in years prior, according to data compiled from the Growler Magazine and MNBeer, local publications focused on the craft beer industry.

Breweries launched in Minnesota by year
After a small slowdown in the number of breweries that opened in Minnesota — the first since the "Surly Law" was passed in 2011, legalizing taprooms — in 2016, 2017 saw an unprecedented boom, according to data MinnPost compiled from local beer websites the Growler and MNBeer. These data do not include brewpubs.
Source: The Growler, MNBeer.com

Meanwhile, the Pioneer Press reported in December that Summit, one of the state’s very first craft breweries, was laying off 10 percent of its 100-person staff, citing changes and competition in the craft beer industry. Earlier in 2017, the brewery announced it would halt distribution to six states (to be fair, Summit says it’s not going anywhere, just making adjustments).

But beer industry boosters say despite increased competition, there’s still room for growth, pointing to breweries opening in small towns across the state, and even in the more beer-soused Twin Cities.

Here’s the thing: they could both be sort of right. With increased competition, brewers say it’s harder and harder to compete selling craft beer on liquor store shelves. But with craft beer catching on with a wider swath of the population, industry watchers say it’s easier and easier for suburbs and small towns to support their own breweries.

Joseph Alton, the editor-in-chief of the Growler Magazine, counts 150 breweries open in Minnesota today. About a fifth of them opened in 2017.

What types of breweries did 2017 bring?

“We’re seeing more small breweries, more niche breweries, more neighborhood breweries, as opposed to the kinds of breweries like Surly, Summit, even Fulton that are making tens of thousands of barrels of beer per year,” Alton told MinnPost.

That’s not to say it doesn’t happen, he said, giving Utepils, which opened in Minneapolis’ Bryn Mawr neighborhood in 2017, as an example.

Of the 30 breweries that opened in Minnesota in 2017, the majority were located outside the Twin Cities metro, a departure from 2016, which saw about half the overall openings, and more located in the metro.

This trend is national as well, said Bart Watson, who studies the beer industry as chief economist at the Brewers Association, a trade group based in Colorado.

“More of these breweries opening now are locally-focused and service-oriented. More may open, but it’s not necessarily comparable to the breweries that opened a few years ago that maybe were thinking about wider distribution more,” he said.

And while breweries are closing in Minnesota, it’s happening in pretty small numbers: A year ago, MinnPost counted four breweries that had closed in Minnesota since 2011. In 2017, another three closed, according to the Growler: Sidhe Brewing in St. Paul, South Fork Brewing Company in Delano and Wenonah Brewing Co. in Goodview. That’s not necessarily a sign that things are going south for the industry, though, as about 50 percent of U.S. businesses close within five years of opening, according to Gallup.

While the number of breweries that opened in 2017 increased over the prior year, the growth rate in the volume of craft beer produced has slowed, Alton said.

“I don’t think anybody in the business of beer in Minnesota should be scared,” Alton said. “I think there’s still a lot of room for growth, it’s just going to be slower.”

If he was going to open a brewery in Minnesota, Alton said not that you can't succeed in the Twin Cities, but he’d open outside the metro: not only is there a sense of loyalty to local breweries that you don’t find as much in the cities, where there are so many of them, but there’s often support from local governments: some towns have been so eager to lure a brewery that they’ve pre-emptively changed rules to allow them, Alton said.

It wasn’t originally in the plans for HeadFlyer Brewing, which opened in Northeast Minneapolis in April, to open in the most brewery-dense neighborhoods in the city.

Amy and Neil Miller, a couple who make up two of HeadFlyer’s owners, had been planning to open a brewery for about three years. He’d been homebrewing for 10 years, and she’d always wanted to own a small business, so a brewery seemed like just the ticket. But they originally planned to open what they called a mom and pop brewery in the suburbs — one that would cater to people who, like them, have full-time jobs and kids.

Then they found a space they couldn’t pass up, a spacious spot in the Miller Textile building on East Hennepin, which has high ceilings and exposed stone walls.

So far it’s gone well. The place was almost packed Wednesday night for a weekly trivia night. Amy Miller said she wasn’t expecting to have regulars — she thought it’d be more of a stop-off on brewery crawls in Northeast — but they do. 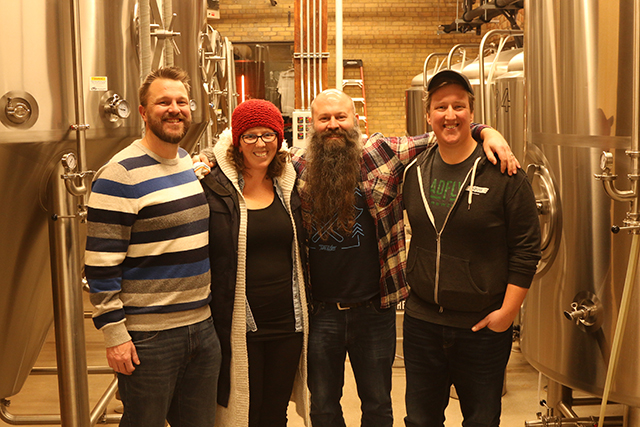 They’ve even found a camaraderie in the area, as proprietors of other breweries stopped by while the building was under renovation to say hello, or bring gifts.

“The thing about the Northeast brewery scene is yes, you can jump around as a patron, but also as an owner the community is great,” Amy Miller said. “If we were out in the suburbs if we needed to borrow a bag of grain or a jockey box (which helps cool beer) … I don’t know that we’d have that relationship.”

HeadFlyer has the taproom, plus has its beer in a few local restaurants, like W.A. Frost in St Paul and Nolo’s Kitchen in the North Loop, but, aware of the crowded liquor store shelves, the plan for now is to get the name out there before they look into expanding, Neil Miller said.

“We’ll slowly start to expand out. We’ve got to get the name out there,” he said.

Miller says HeadFlyer’s experience suggests there’s still room for the industry to grow: HeadFlyer may be near some of the biggest brewery destinations in the state, but when it opened in a relatively less crowded stretch on East Hennepin, it gained converts by becoming some locals’ closest brewery. And he still thinks many Twin Cities suburbs could easily support one or two breweries of their own.

Indeed, while Minnesota’s has seen growth in its craft beer scene, it’s far from the most brew-saturated state.

According to the most recently available data from the Brewers Association, the state’s craft beer scene hasn’t grown fast enough to keep up with some of its more brew-crazed brethren in recent years.

In 2015, Minnesota ranked 14th for breweries per capita, with 2.7 for every 100,000 residents over age 21. Despite upping its density of breweries by 0.1, it slipped to 16th in breweries per drinking age capita in 2016. (For those keeping score, Wisconsin ranks ahead of Minnesota, at 12th. Iowa and Michigan are also ahead of us at 14th and 15th, respectively).

Minnesota was late to the game compared to some states, though: it wasn’t until 2011 that the Minnesota Legislature legalized taprooms by passing the “Surly Bill.” Colorado had more than 100 craft breweries licensed in 2011, according to the Brewers Association.

New state-by-state data from the Brewers Association for 2017, expected in the coming months, will show whether or not 2017, the banner brewery year, moves the needle for Minnesota.

As far as the future goes, Alton expects to see continued growth, but perhaps not at the rate seen in years past.

“I have dismissed for years the idea of a saturation point. I really don’t think we’re close to that,” he said.

And bring on the competition, he added. Already, it seems to be making the beer in Minnesota palpably better.

“A lot of the beer being made in Minnesota is crap, and that’s unfortunate. As this industry matures and as the consumer base matures, that’s not going to be acceptable anymore,” he said.