Mariam Mohamed has fond memories of eating sambusa when she was growing up in Somalia. It was a special-occasion food, the stuff of weddings and iftar, the evening meal to break a Ramadan fast.

“Whenever we invite people for a special occasion, especially in the south, sambusa is very prominent,” recalls Mohamed. “You look forward to go[ing] to that party because there will be sambusa.”

For the uninitiated: Sambusa is a triangular pastry filled with spiced meat. It’s the same shape as an Indian samosa, but the fillings are different. The outside is crispy from deep-frying, the inside filled with meat and onions, boldly flavored with garlic, cumin, coriander, turmeric, and red chili peppers.

Up until a couple of years ago, if you wanted sambusa in the Twin Cities, you had to either make them yourself or go to a Somali restaurant. But Mohamed and her business partner, Matt Glover, have been trying to change that, creating a frozen version of the pastries for the masses.

And yet, their company, Hoyo, very nearly didn’t get off the ground, and they’ve survived so far by making some unexpected U-turns.

The first challenge was also the most obvious: sambusa are incredibly time consuming to make. The dough, called folio, has to be made by hand. Moreover, each sambusa has to be sealed into a tight triangle so that the inside stays dry when it goes into the hot oil. Mohammed says folio is not available ready-made. The closest things are egg roll wrappers or tortillas.

The first time Glover made sambusa with Mariam Mohamed and her sister Halima, they spent two and a half hours making just 25 sambusa. “I thought initially there’s no chance we’re going to be able to make a business out of this,” says Glover. “But we kept at it.”

Their first day in an industrial kitchen, they made 120 in an 8 hour day. “We still looked at that and said economically that’s not okay,” says Glover. Now, thanks to continued streamlining, they can make 1,000 in a day. In a bit of cross-cultural innovation, they found that a tortilla press flattens the folio to the perfect consistency.

At first glance, Mohammed and Glover would seem to make an odd couple of business partners. She’s in her late 50s, a self-proclaimed bookworm with a ready laugh who came to the U.S. from Somali in 1985. He’s 36, a white guy from White Bear Lake who was consulting with ethnic restaurants on western service standards when the two met and became friends.

What they had in common was a desire to empower Somali women. For Glover, the motivation began with a neighbor, a Somali woman, who was raising eleven children on her own. At the time, Glover and his wife had newborn twins. “We were barely getting by with two kids and two parents,” Glover recalls. “Our hearts just went out to mothers, so we wanted a business that would really help them.”

At first, Glover and Mohamed imagined busy Somali moms — “hoyo” means mother in Somali — popping their product into the oven in time for dinner, and so they delivered their frozen product to several Somali stores.

But nobody — at least nobody in their intended target audience — wanted them. “They all said, why would I buy that when I can make it myself?” said Glover. 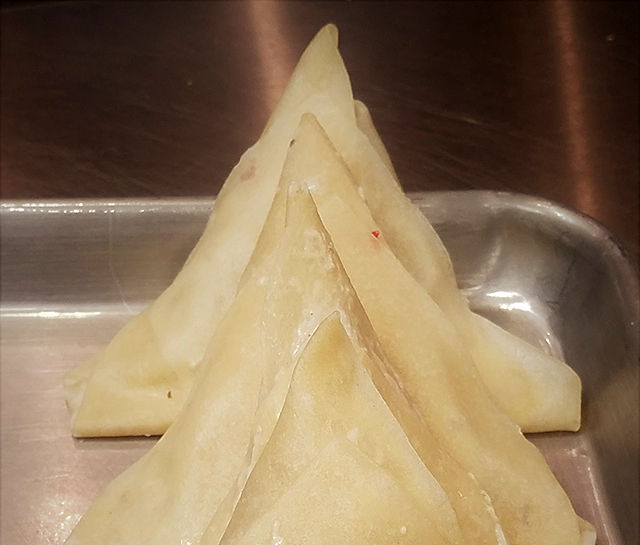 At the time, Glover imagined a year’s worth of preparation going down the drain. But then company connected with the Seward Coop in Minneapolis, which allowed them to demo Hoyo’s sambusa to the store’s mostly non-Somali shoppers.

That move changed pretty much everything for the company. “We sold about 40 bags of sambusa in about an hour,” Mohammed marveled. “It was amazing.”

As a result, the company shifted its marketing to target non-Somali consumers, and Hoyo’s frozen sambusa are now available in some 20 grocery stores and co-ops throughout the metro.

Despite that evolution, Mohammed insists the flavor of the company’s sambusa is totally authentic, although she did make one concession for Minnesota tastebuds: Hoyo cut way down on the chili pepper. “Most Somalis like it with a lot of pepper,” she says.

The company has recently developed a vegetarian, lentil-filled sambusa alongside the original beef. They also sell basbaas, a Somali-style salsa made of cilantro and onions. 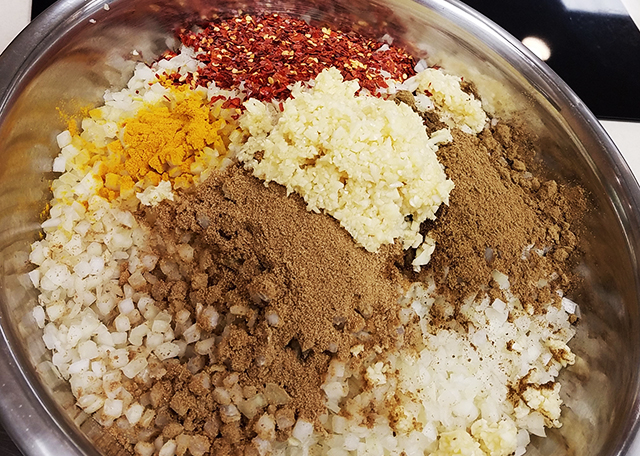 Glover says the company is now break-even and employs eight people, all part-time. In line with their stated goal of “empowering Somali women through Somali food,” the company is registered as a public benefit corporation, a designation a for-profit entity that is socially-minded. Mohamed and Glover say they’re proud that the company builds upon a skill that many Somali women gained as girls.

One requirement for new hires, however, can be tricky:  They have to leave their personal recipes at the door. As with many traditions handed down through families, many people have their own preferred variations on sambusa. “We get that conversation almost every time we hire a new employee,” says Glover, laughing. “They say ‘Why are you doing it this way?’”

The next challenge awaiting the company is to find a full-time industrial kitchen space. Currently, they work two days a week out of the VEAP organization’s kitchen in Bloomington. And though Mohammed and Glover are dreaming big, for now they’re content to keep on rolling out the folio dough, trying to introduce sambusa to Minnesota, one bite at a time.