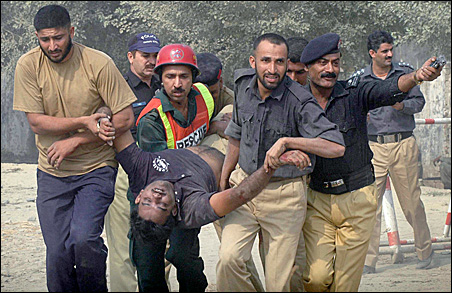 REUTERS
Police and rescue workers carry the body of a dead policeman from the Manawa police training centre after it was attacked by gunmen in Lahore on Thursday.

ISLAMABAD, PAKISTAN — A series of deadly attacks apparently aimed at testing the resolve of Pakistan’s security forces ahead of a planned offensive against militants in South Waziristan left more than 30 dead on Thursday.

Two of the targets had been attacked before, underscoring the reach of the Taliban, which claimed responsibility, and the failure of security forces to secure high-profile locations.

While the onslaught of attacks in urban areas may deepen Pakistanis’ sense of insecurity, it could also strengthen their support for the Army to fight the Taliban.

“The most dangerous thing is they were able to target the same places twice. So we’re running out of adjectives here. We’ve been calling them bold, brazen, audacious,” says Asha’ar Rehman, the Lahore bureau chief of Dawn, a leading English daily. “It hurts the psyche of the people. After learning the lessons of the past, we’re still an easy target.”

In tactics similar to those used to strike the Army headquarters in Rawalpindi last week, militants disguised in uniforms attempted to storm an office of the Federal Investigation Agency (FIA) and two police academies in the eastern city of Lahore, killing at least 23 people.

The FIA building had been target of a suicide bombing in 2008 that killed 21 people. One of the police academies, at Manawan, on the outskirts of Lahore, was besieged by militants in March, leaving 18 dead. Militants at the other academy, on Bedian Road, succeeded in taking hostages until their siege was ended in the early afternoon.

Mr. Rehman, of Dawn, says residents in the city had just begun to return to their routines following a string of high-profile attacks that took place earlier this year. These included a commando-style assault on the Sri Lankan cricket team in March and the killing of prominent anti-Taliban cleric in June.

Disappointed with the government

Some Lahoris, like Mehreen Shehzad, who works at a nongovermental organization, say they feel let down by the government and helpless in the face of fresh attacks. “They always claim to have intelligence reports of imminent attacks on specific places after each incident. The FIA building seems to be taking repeated hits. When they know security forces are targets they should step up their defenses in those places.”

The Lahore attacks began around 9 a.m. and continued till the early afternoon. Television footage showed helicopters hovering above the police academies while police and paramilitary forces hid behind trees and scaled walls during their clashes with militants.

The city – considered the country’s cultural capital and the capital of Punjab, Pakistan’s most populous province – was paralyzed as shops, offices, and schools closed and a session of Punjab assembly was suspended.

According to Stratfor, an intelligence company based in Austin, Texas, “urban attacks in the Punjab center send a message to the Pakistani people that they are not safe in this area of the country. Though it is often perceived that militant problems in Pakistan are centered in the [northwestern] Pashtun areas, similar attacks are meant to reinforce fears in the country that more attacks of this nature will be felt in the heart of the country, and not just in far off regions.”

Deeper resolve to fight back?

But the attacks could also have the opposite effect, and cement public opinion behind a planned military offensive in South Waziristan, where 80 percent of all terror attacks originate, according to military spokesman Lt. Gen. Athar Abbas.

The Army has said it will soon launch a ground offensive in the region, which borders Afghanistan and is home to Pakistani Taliban leader Hakimullah Mehsud. Pakistani forces are currently engaged in “softening up” the area through airstrikes and have blockaded the area with 28,000 soldiers.

Salman Kazmi, a doctor who works in the emergency ward at a Lahore hospital says, “It’s really time for the government to act now and break their networks everywhere, including Waziristan. They need to stop these terrorists from infiltrating. Right now, they are targeting security forces, but the next target might be public places.”

Ali Ibrahim, a Lahore-based lawyer agrees. “We should definitely be moving into Waziristan right now,” he says. “Once you decide to take action, that should be wholehearted and made with a full effort.”