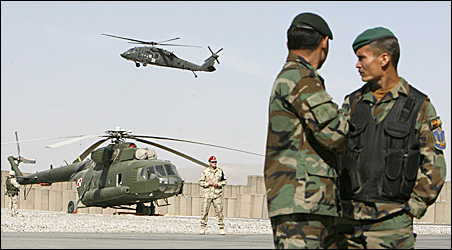 REUTERS/Mustafa Andalib
Afghan army soldiers watch as a U.S. helicopter flies over a Polish helicopter at a military base in Ghazni province, Monday, Oct. 26, 2009.

Monday’s deadly crashes involving US helicopters in Afghanistan highlight the extent to which American forces depend on helicopters for travel throughout that vast, mountainous country.

Depending on the model, US copters are flying in Afghanistan and Iraq three to five times more than they would in peacetime. That may be indicative of how hard American units are using all their large pieces of equipment, from cargo aircraft to armored mine-resistant vehicles.

“We’re flying the rotors off helicopters in Afghanistan,” says Stephen Biddle, senior fellow for defense policy at the Council on Foreign Relations (CFR) in Washington.

Helicopter crashes killed 14 US personnel on Monday, making it the deadliest day for American forces in Afghanistan in more than four years.

In the country’s west, a US helicopter went down after leaving the scene of a firefight, killing seven troops and three Drug Enforcement Administration agents.

The personnel had been involved in an antinarcotics operation, according to a military spokesman, who added that hostile action was not the likely cause of the crash, as the helicopter was not taking fire when it took off.

Helicopters are at a premium in today’s wars, according to US officials. Since the invasion of Iraq in March 2003, American copters have flown more than 3 million flight hours, pointed out Lt. Gen. Stephen M. Speakes, deputy chief of staff of the Army, in an appearance before the House Armed Services Committee earlier this year.

Yet mission-capable rates for Army aircraft have met or exceeded their 75 percent standard, said Speakes.

Given the heavy usage, the Pentagon budget for 2010 has penciled in a $500 million increase to field and sustain more helicopters. Budget documents call the increase necessary because copters are “a capability that is in urgent demand in Afghanistan.”

The focus of any new resources would be in recruiting and training more Army helicopter crews, according to the budget documents, “because the principal limitation on helicopter capacity is a shortage in maintenance crews and pilots rather than a lack of airframes.”

The trouble with helicopters is that they are a scarce resource that is in demand everywhere, says Mr. Biddle of CFR.

There is no question more of them would be useful in Afghanistan. But other sorts of military resources, such as more ground troops, might be useful, as well. Given limited manpower, it is a difficult trade-off to set priorities.

Blizzards, high winds, and the high altitudes of Afghanistan have all played havoc with helicopter equipment. But in some ways, US helicopter flight perhaps has been easier than commanders expected.

That is because the military threat to the helicopters has been “relatively modest,” Biddle says.

When the Soviets invaded Afghanistan, they were bedeviled by hand-held US Stinger antiaircraft missiles fired by the Afghan mujahideen. Today, the Taliban do not appear to have a similar ground-to-air capability.