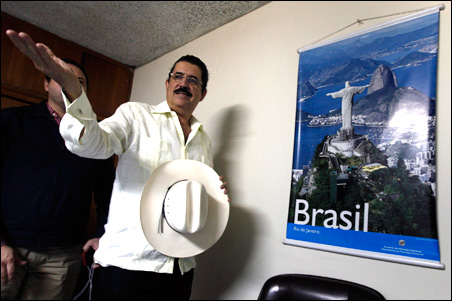 REUTERS/Edgard Garrido
Honduras’ ousted President Manuel Zelaya waves during a meeting with his representatives inside the Brazilian embassy in Tegucigalpa on Monday.

TEGUCIGALPA, HONDURAS — Hopes were, once again, dashed yesterday that the political crisis polarizing this Central American nation will soon come to an end.

An aide to ousted President Manuel Zelaya told reporters Monday night that his camp will not return to negotiations until a “constructive” proposal is submitted by interim president Roberto Micheletti.

At the center of the disagreement is whether Mr. Zelaya should be restored to power after he was arrested and deposed June 28 by the military. Talks have not broken down entirely. But the elusiveness of a solution has further polarized this already divided nation – making it more difficult to come together as both camps battle over which government institution should decide on Zelaya’s fate.

This country has largely split along two lines: “golpista” or “golpeada.”

It’s a play on Spanish words which is intended to mean either one is a coup monger or a victim of the coup.

The phrase “Kill a Turk and be a patriot” is hand-painted on city walls and buildings, a sign of long-held but deepening resentment between the poor and the rich, many of whom are of Middle Eastern descent (though not Turkish, despite public perception).

“The sequel of the conflict will be polarization,” says Father Germán Calix, executive secretary of Caritas, a Roman Catholic aid and development agency. Caritas plans to lead a series of workshops on reconciliation and will invite teams of Caritas staff from Colombia experienced in conflict resolution to train those in Honduras.

Oswaldo Canales, the head of the Fraternity of Evangelical Churches in Honduras, says that “insults from both sides have created hate between the people.”

“After the elections, we need to begin a full process of reconciliation,” based on faith and the principles in the Bible, he said.

But Leticia Salomon, a sociologist at the National Autonomous University of Honduras, doubts the efficacy of church efforts at reconciliation,­ since residents perceive that both the evangelical and Catholic churches both supported Zelaya’s ouster, and said the media are just as mistrusted. A truth commission could help unify the country, she said. “Or this fight will continues for the rest of our lives,” Prof. Salomon said. “We need to recuperate the basic democratic principles of tolerance and plurality.”

The real problem, says Roger Marin, a political analyst and columnist, is that all sides were right to a certain extent. It is the reason that a solution is so elusive, but it has also helped the nation mature.

“Something had to shake the country,” says Mr. Marin. Young people were apathetic, he says, and the privileged class ruled the country as they wished. “Now we can begin to press the government for change that is needed…. If we are able to resolve this without violence, it almost was worth it.”

Some are not so sure. “This country will never be the same,” laments Ima Avila, a medical equipment saleswoman in Tegucigalpa.