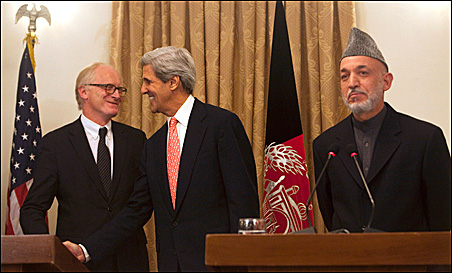 KABUL, AFGHANISTAN — Afghanistan’s presidential election is heading toward a runoff, and the campaign of incumbent Hamid Karzai appears to be backing off threats to reject such a result.

Analysts see these developments as a step toward restoring some credibility to an election marred by widespread fraud, low turnout, and Afghan suspicions of foreign meddling.

On Monday, a commission tasked with sorting out fraud complaints publicly issued its rulings, almost two months after the original vote. Once applied, President Karzai is expected to wind up with 48 percent of the vote – just shy of the threshold needed to win after a first round.

“We are waiting for a final certified result,” says Waheed Omer, spokesman for Mr. Karzai’s campaign late Monday. “Whatever it comes out in a certified, final result, that will be acceptable to us.”

The caveat is that the only body capable of making that final certification – the Independent Election Commission (IEC) – is run by Karzai appointees and had hired some election workers who went on to commit fraud on Karzai’s behalf.

However, the IEC is bound under Afghan law to implement the fraud rulings as directed. The most it’s expected to do for Karzai is delay certifying the results for a few days. Analysts express hope that then the process will move on toward a more legitimate resolution.

“If you can get Karzai to acknowledge ‘I didn’t win the first round, because I didn’t get 50 percent plus one vote,’ I think that’s a step in the right direction toward giving the process some legitimacy that’s already proved to be somewhat of a fiasco,” says John Dempsey, a legal expert at the Kabul office of the US Institute of Peace, nonpartisan organization funded by the US Congress.

Why Karzai did an about face
Over the weekend, the Karzai camp threatened to reject the entire election if the internationally-back electoral commission ruled that he did not, in fact, win the election outright.

Mr. Omer argued that so many votes would have to be tossed out to trigger a runoff that the election would lose its credibility. In the end, nearly a third of Karzai’s votes were nullified.

“If 25 or 26 percent of the votes were fraudulent then this election has no legitimacy,” Mr. Omer told the Monitor. “We think the process will not result in that unless there is a political decision, in which case obviously we will react to it politically.”

The talk now of accepting a certified result represents a 180-degree turn. That could be due, in part, to a parade of high-level foreign officials that has put pressure on Karzai to accept the ruling.

Further, some of Karzai’s high-level supporters are arguing that a run-off is winnable so long as his voters aren’t soured away from going to the polls again.

Many ordinary voters are mistakenly interpreting talk of a run-off as a nullification of the first vote – a re-vote essentially, says Khalid Pashtoon, a Karzai supporter and Member of Parliament from the troubled southern region of Kandahar. Rather than cast aspersions on a runoff, he recommends a strategy of educating Karzai’s base about the importance of getting out and casting that second-round vote.

All of which is good news to foreign diplomats worried that a Karzai refusal to accept would cripple efforts to salvage the electoral process and find a “legitimate” partner for the Western aid agencies and military forces.

Runoff or power-sharing deal?
Mr. Dempsey, however, doubts the process will go to a runoff.

He sees the likely next step as a political deal struck between Karzai and the man he would face in a runoff, Abdullah Abdullah. Such a deal would see Dr. Abdullah conceding in exchange for a share of power in the next government. No runoff would be necessary.

But if Karzai’s acceptance of today’s fraud ruling would mark a step toward accepting due process, a deal with Abdullah might be interpreted as an opposite move.

Afghan election law says that if nobody gets 50 percent plus one vote in the first round, a runoff must be held to determine a winner. If one of those two parties concedes, it’s unclear if the election can be called without the runoff.

“There is an absence of law, a silence, and for this you need an interpretation,” says Ahmad Nader Nadery, commissioner of the Afghanistan Independent Human Rights Commission.

It would fall to the Supreme Court – appointed with no oversight by Karzai – to provide that interpretation.

“The Supreme Court is not strong enough to be able to get that much trust on [such a] decision that it was impartial,” he says.

There are arguably worse outcomes in the search for a legitimate government at the end of this process.

An outright Karzai win would have unsettled the international community and many Afghan voters with the possibility his camp would have gotten away with massive fraud.

If no deal is reached, a runoff vote could be derailed by extremely low turnout, Taliban disruption, or failure to organize it before the snow starts falling.

A glimmer of hope
While there’s no guarantee today’s ruling will lead to a government with a clear mandate and legitimacy, analysts say it at least is bringing some clarity to the road ahead.

“This is at least not a worsening of the situation. The situation is clearer than it has been and it is potentially moving toward one of the better case scenarios,” says Martine van Bijlert, co-director of the Afghanistan Analysts Network.

That said, she warns the controversy surrounding fraud and its handling isn’t necessarily over, even if Karzai accepts an under-50 percent certification.

“Whether this step really enhances the legitimacy of the process, depends mainly on how it is perceived. If for instance Karzai accepts the outcome, but at the same time people around him are spreading mixed messages or conspiracy theories, then it will remain a muddled matter in the pubic perception,” she says.