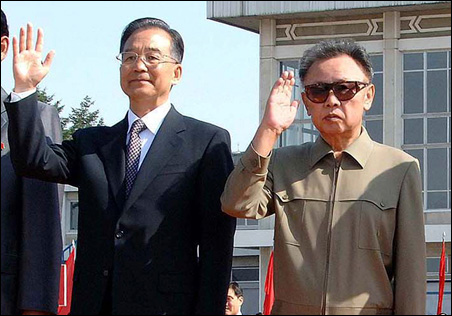 SEOUL, SOUTH KOREA — North Korea’s new readiness to return to stalled international talks about its nuclear program – if prior negotiations with the United States go well – puts the diplomatic ball in Washington’s court.

“This is a test for the Obama administration’s policy on North Korea,” says Ryoo Kihl-jae, a professor at the University of North Korean Studies in Seoul.

Initial signs suggested that the US was prepared to pick the ball up. “We, of course, encourage any kind of dialogue that would help us lead to … the complete and verifiable denuclearization of the Korean peninsula,” said State Department spokesman Ian Kelly.

Pyongyang withdrew in April from six-nation talks aimed at ending its nuclear program and its international isolation, saying it would never return.

Tuesday, however, the official North Korean news agency quoted “Dear Leader” Kim Jong-il as telling Chinese Prime Minister Wen Jiabao during this week’s high-profile visit to Pyongyang that “we expressed our readiness to hold multilateral talks, depending on the outcome of the DPRK (North Korea)-US talks. The hostile relations between the DPRK and the United States should be converted into peaceful ties through the bilateral talks without fail.”

The significance of the move, however, is still unclear.

“The real stumbling block is whether North Korea will show willingness to give up its nuclear weapons,” says Kim Tae-woo, deputy head of the Korea Institute for Defense Analyses, a Seoul-based think tank. “If not, this does not mean any real progress.”

South Korea’s Yonhap news agency Tuesday quoted an unnamed South Korean official as saying intelligence reports suggested that the North has almost completely restored the nuclear facilities it had begun to dismantle under an earlier agreement.

The six-party talks, including North and South Korea, China, the US, Russia, and Japan, have failed so far, despite the fact that all sides agree on the rough outline of a final deal.

That would mean Pyongyang would give up its nuclear program – it has already tested two nuclear devices – in return for international diplomatic recognition, large sums of economic aid, a peace treaty formally ending the Korean War, and guarantees of its security.

Repeated efforts to move toward such a solution have been thwarted by bickering and mutual recrimination over unmet promises.

“The problem has always been sequencing,” says David Kang, a Korea expert at the University of Southern California. “Both sides agree the deal is nukes for normalization; the problem is who goes first.”

To overcome this difficulty, and to prevent North Korea from quibbling over every detail, South Korean president Lee Myung-bak late last month proposed a “grand bargain” resolving all the issues in one fell swoop, rather than step by step.

North Korea prioritizes deal with US

Pyongyang appears to be seeking a similar deal with the US, which it regards as its main threat, bypassing the Chinese-brokered six party talks.

Though North Korea has not publicly stated its agenda for the talks it would like to hold with Washington, the beleaguered pariah state is likely to demand an end to US financial sanctions that are hobbling its foreign-currency transactions, as well as a wide range of deeper concessions.

Those would probably include a demand that Washington treat Pyongyang as a nuclear-power equal, and agree to remove South Korea from the US nuclear umbrella, removing US troops from the country, in return for North Korean denuclearization.

Even without such far-reaching demands, however, Washington appears reluctant to be drawn into substantial negotiations alone with North Korea. US officials have reassured other parties to the multilateral talks that in any bilateral meetings, Washington would discuss only a resumption of six-party talks.

“Washington will be very careful in consulting repeatedly at a high level with the other parties about any bilateral dialogue,” says David Straub, a former US diplomat in Seoul who accompanied former president Bill Clinton on his trip to bring two detained American journalists home from Pyongyang this summer.

At the same time, suggests Professor Kang, “If the Americans can see a path to somewhere, they might be willing to do something,” as long as it did not entail too many risks.

That might give Mr. Kim something he has long wanted, says Paik Hak-soon, a political analyst at the Sejong Institute in Seoul. “Dear Leader” Kim “wants to restructure the whole negotiations to get away from low-level technical issues,” such as verification, “to a high-level agreement” with the US, says Mr. Paik.

Though Kim agreed conditionally to return to the six-party talks, Zhang Liankui, a professor at the Chinese Communist Party Central School in Beijing, says North Korea actually believes those negotiations “are dead.”

Since China chairs those talks, however, explains Professor Zhang, “it was not a good idea to reject the idea of six-party talk in front of a Chinese leader.”