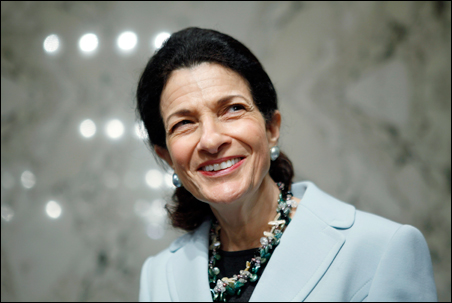 But her reservations – along with those of many Democrats on the panel – signal how tough it may be to hold that reform coalition through final floor votes.

“Is this the bill that I would want? Far from it. But when history calls, history calls, and I happen to think that the consequences of inaction dictate the urgency of Congress taking every opportunity to demonstrate its capacity to solve the monumental issues of our time,” she said.

“My vote today is my vote today. It doesn’t forecast what my vote will be tomorrow,” she added.

With the exception of Senator Snowe, the committee members voted along party lines, passing the bill 14 to 9.

The vote sets up complex, closed-door negotiations over a merged bill to take to the floor. In principle, the Finance bill must now be melded with the draft bill produced by the Senate Health, Education, Labor and Pensions panel, which includes a public option. (The Finance Committee’s version of the bill does not.)

Democrats, too, say that they voted with the draft bill to move the process along, but that the final bill must include a public option to ensure that Americans have affordable options.

“The insurance industry gets too sweet a deal in this,” said Sen. John Rockefeller (D) of West Virginia. “They get half the money and yet no real responsibility to put it into medical care…. The public option is necessary because the insurance industry does not know how to stop itself.”

But keeping Democrat moderates on board going forward will also be a challenge to leadership. Sen. Blanche Lincoln of Arkansas, a moderate Democrat facing a tough reelection fight in 2010, says her vote for a final bill depends on whether the final bill increases the deficit, protects seniors, and curbs the rising cost of health insurance in the long term.

“I hope we will remember that Americans out there are frightened…. They’re alarmed about the deficits in this country and about a big bill that’s difficult to understand,” she said. “We need to take our time and to get it right.”

Affordability surfaced as an unexpectedly tough issue for Democrats after insurers released a new report projecting that health insurance costs for a typical American family would be $20,700 higher from 2010 to 2019 under the Senate Finance plan than if Congress failed to act.

“The bill imposes hundreds of billions of dollars in new healthcare taxes and provides an incentive for people to wait until they are sick to purchase coverage,” said Karen Ignagni, president and CEO of America’s Health Insurance Plans (AHIP), which commissioned the study.

Pressed by lawmakers on both sides of the aisle to comment on this study, Congressional Budget Office Director Douglas Elmendorf said that CBO had scored the impact of proposed legislation on the federal budget, but not on the national health expenditures.

Although CBO has done such estimates in scoring past healthcare bills, “the scope of this bill is so much broader” that there was not sufficient time to complete the analysis, he said.

The AHIP report gave Republicans new grist to make a stand on affordability on the Senate floor. The Finance bill proposes spending $829 billion over the next 10 years, including $461 billion in subsidies, and paying for it with the biggest cuts in Medicare history ($404 billion), yet only insures about 10 percent more Americans, said Sen. Charles Grassley (R) of Iowa, the top Republican on the Senate Finance panel.

“This is going to be merged with a totally partisan bill, then with whatever the House does. It’s going downhill from here,” he said, after the vote.

“We have one brave soul who voted to get the [healthcare] bill out of the Finance Committee. We’ve had no cooperation on one of the most important issues facing this country,” he said on the floor after the vote.