WASHINGTON — Senate Democrats lost 13 of their own today on a bellwether vote to shift a $245 billion “fix” for doctors serving Medicare patients out of the larger health-care debate.

The bid to permanently repeal a formula that annually cuts payments to doctors failed 53 to 47.

“It is unfortunate that Republicans have again chosen to put politics before the needs of the American people,” said Senate Majority Leader Harry Reid, in a statement after the vote. 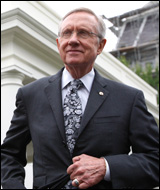 Republicans, including many who had in the past voted for the annual “doc fix,” which prevents cuts in payments to Medicare doctors, unanimously opposed the bill. They called the bid to take the issue outside the health reform debate into a stand-alone bill a fiscal gimmick.

But the wake-up call was the number of Democrats who joined them – a signal that moderates will not back a health-care plan that adds a dime to the federal deficit.

The Medicare Physician Fairness Act is a top priority of the American Medical Association (AMA), a key partner with the Obama White House in the bid to overhaul the healthcare system.

In a press conference on Tuesday, AMA president James Rohack denied that the bill was a quid pro quo for support for the bill. “We are focusing on trying to get this problem that predates healthcare reform resolved,” he said.

When Congress passed the “sustainable growth rate” formula for Medicare in 1997, the aim was to give physicians treating Medicare patients an incentive to rein in costs. Instead, health-care costs so outstripped the rate of inflation that the formula translated into accelerating cuts for physician payments, driving many in the profession out of the business of serving Medicare patients.

Congress has passed a “fix” every year since 2003 to avert the cuts.

Republicans and moderate Democrats Wednesday said they could not support a fix that cost $245 billion over 10 years without budget offsets. The Treasury announced last week that the federal budget deficit for FY 2009 was $1.4 trillion.

If Congress does nothing, the payment cut for FY 2010 is expected to be 21 percent. Majority leader Reid said that the Senate will address the issue again after health insurance reform.

“Despite today’s outcome, I am determined to continue working to address the current flawed payment system. I remain hopeful we can pass a multi-year fix after health insurance reform,” he said.

Reid also sent a shot across the bow of the insurance industry Wednesday by announcing plans to move to the floor an amendment to lift the insurance industry’s exemption from antitrust laws. Senate Democrats across the board were riled by the release of a report critical of the Senate Finance Committee’s version of health care reform on the eve of that committee’s Oct. 13 vote.

Meanwhile, the House Judiciary Committee Wednesday voted 20-9 to regulate abusive practices in the insurance industry, including price fixing and market allocation. That bill – more limited in scope than what the Senate is proposing – is expected to be part of the House health reform bill.