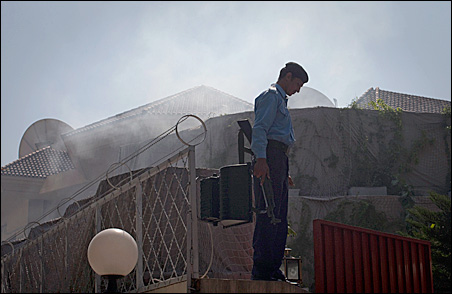 REUTERS/Adrees Latif
A policeman stands on the walls of the U.N. World Food Programme offices in Islamabad as smoke rises from the aftermath of a suicide bomb attack inside the compound Monday, Oct. 5, 2009.

The attack disrupted a two-month lull in major terrorist attacks in Pakistan that followed the death of Taliban leader Baitullah Mehsud. It may have been carried out by militants seeking to avenge his death, some government officials and analysts say, though no one has yet claimed responsibility.

“You can’t wish them away. They will strike when they feel there is a chance,” says Imtiaz Gul, a security analyst at the Center for Research and Security Studies in Islamabad. “There was a brief lull while they were in disarray, but this may be changing.”

Questions are likely to be raised after Interior Minister Rehman Malik said that the attacker was able to enter the heavily fortified UN compound by wearing a uniform and asking to use the toilet.

The attack also raises concern about a possible setback to the WFP’s efforts in assisting millions of Pakistanis displaced by Army offensives in the northwest.

According to the television network Express 24/7, at least 80 people were in the building at the time. The blast took place in the reception area of the building, and was followed by plumes of smoke rising above the upscale neighborhood. Four of the dead ree Pakistanis (including two women) and the fifth fatality was a male Iraqi national.

“It is a struggle against the Pakistani interest with the intention of scaring foreigners out of Pakistan,” says Mr. Gul.

Mr. Malik announced at a press conference that the Taliban had been pushed onto the back foot through military operations in the tribal areas and were seeking to lash out. “Our informants told us they decided around Eid to step up suicide attacks,” he said.

He said the attack would not deter Pakistanis and told the Taliban, “the whole nation is now against you.”

The conflict in Pakistan is inextricably linked to the fight in Afghanistan. Is the US counterinsurgency strategy working? Should the US send more troops?