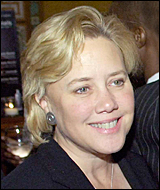 WASHINGTON — On Saturday, Sen. Mary Landrieu (D) of Louisiana was pressed by reporters on whether she had cast a vote with Democratic leadership on health care in exchange for $100 million in federal aid to her state.

She seized the opportunity to correct the record.

“It’s not $100 million, it’s $300 million, and I’m proud of it and will keep fighting for it,” she told reporters after a floor speech announcing her support of a vote to begin debate on health-care reform.

The exchange was vintage Landrieu. Once viewed as the most vulnerable red state Democrat, sure to be toppled at the next election, she
has been sent back to the Senate twice, by the same electorate that gave Republicans presidential candidates wins by double-digits margins in Louisiana.

Politics for Senator Landrieu was also stepping into the family business. Her father, Moon Landrieu, was a celebrated mayor of New Orleans and Housing and Urban Development Secretary in the Carter administration. Her brother, Mitch Landrieu, is the state’s lieutenant governor. Since coming to the Senate in 1997, Landrieu has never been far from critical 11th hour deals.

In 2008, Landrieu, a member of the Senate Appropriations Committee, won some $470 million in funding for projects targeted to her
state, second only to the panel’s chairman. The $300 million sweetener for her health-care vote, announced on Saturday, is targeted to help states hit by major disasters, such as Hurricane Katrina, cover soaring Medicaid costs.

“All states are getting hammered by new Medicaid pressures,” says Leslie Paige, a spokeswoman for Citizens Against Government Waste, a budget watchdog group.

“Senator Landrieu might be proud of it, but not only are we borrowing money for her but that puts increased pressure on the other states. Somebody has got to pay the Medicaid bill. It’s going to be interesting to see what other senators ask for their votes,” she says.

Her misgivings about the Senate health-care bill center on the public option, which she worries could undermine the private insurance industry. But she appears to back other key provisions in the bill. She told her Senate colleagues in a floor speech before the Nov. 21 vote that she appreciated provisions in the bill that prevent insurance companies from raising rates or dropping coverage when someone gets sick.

“That important change goes a long way in stabilizing the amount small businesses will have to pay for their health plans and it allows
business owners … to help grow their businesses, then help us grow our economy,” she said.

But she added that her vote Nov. 21 was simply a vote to go forward.

“My vote should in no way be construed by the supporters of this current framework as an indication of how I might vote on the final bill,” she said.