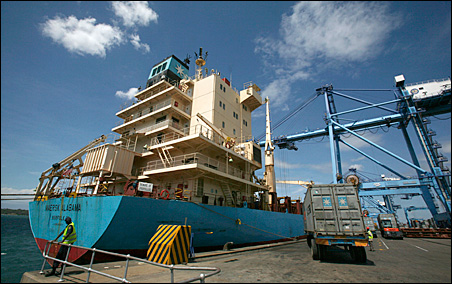 JOHANNESBURG — You know the Somali pirate season is in full swing when the same ship gets attacked twice in a single year.

The US-flagged Maersk Alabama – most recently attacked by pirates seven months ago, and rescued by US Navy Seals – was attacked today by Somali pirates using automatic weapons 350 miles east of the Somali coast. Guards posted on board repelled the attack, and European Union naval patrols swung into action to locate the pirates.

A European Union Naval Force spokesman said that it was not unusual for ships to be attacked twice in the waters off the Somali coast, and credited the presence of armed guards for preventing the pirates from taking control of the ship. “At least this time they had a vessel protection detachment on board who were able to repel the attack,” Captain John Harbour told the Associated Press.

Pirate attacks have been on the upswing for more than a month, now that the monsoon storm season in the Indian Ocean and Arabian Sea has ended. Just this week, pirates have attacked and boarded a North Korean-flagged freight ship, and pirates released a Spanish fishing trawler after payment of a reported $3.3 million.

Piracy has been a major problem along the Somali coast for nearly 20 years, since the fall of that country’s last functioning government in 1991, and its descent into anarchy. But as ransoms became more profitable, pirates have gotten more sophisticated, using mother ships and GPS devices to venture as far as the Seychelles Islands to carry out their attacks.

The Maersk Alabama is not the first commercial ship to use armed guards to repel pirate attacks. The Italian flagged MSC Melody – a cruise ship with 1,500 passengers en route from Durban, South Africa to Genoa, Italy – repelled a pirate attack in April 180 miles north of the Seychelles Islands. A skiff with six apparently Somali pirates fired some 200 rounds at the Melody. A team of Israeli armed guards fired into the air, while ship crew members used fire hoses against the pirates attempting to climb aboard the ship.

Some owners have resisted putting armed guards on ships, arguing that pirates will always be better armed and are likely to continue using their weapons on board, increasing the likelihood that crew members will be injured or killed.

In most cases, pirates leave the crew members of hijacked ships unharmed, experts on Somali piracy say, but their tactics could become more brutal if commercial ships start fighting back.