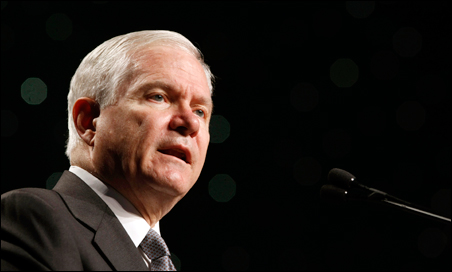 WASHINGTON, D.C. — The Pentagon will undertake a 45-day review to find out if there are “internal weaknesses or procedural shortcomings” across the department that could have allowed the shootings at Fort Hood to occur, Secretary of Defense Robert Gates said Thursday.

The review announced by Secretary Gates will look at possible “gaps and deficiencies” within the Defense Department that led to the failure to identify a threat in its own ranks before it was too late. The review will look at personnel programs, screening processes, and counseling services, as well as look at physical infrastructure and mass casualty evacuation procedures across the services.

The review is one of many now underway within the Army and across government in the wake of the Fort Hood shooting. A preliminary investigation into the incident ordered by President Obama will be complete by Nov. 30. Congress is conducting its own investigation, with a hearing led by Sen. Joseph Lieberman, (I) of Connecticut, held Thursday. Gates’s Pentagon review ordered by Gates will be completed by early January.

Gates, who attended the funeral of Fort hood victim, Spc. Frederick Greene, in Tennessee Wednesday, said these reviews won’t necessarily help people directly affected by the tragedy. “There is nothing any of us can say to ease the pain for the wounded, the families of the fallen, and the members of the Fort Hood community touched by this incident,” he said.

Asked if he considered the shooting to be an act of terrorism, Gates said he would wait until the facts are in. “I’m just not going to go there,” he said.

Hasan, charged with 13 counts of murder, is an Army psychiatrist who reportedly performed poorly on the job and had made some troubling comments about the role of the US in Iraq and Afghanistan. That and other evidence that intelligence officials knew he was in touch with a radical Muslim cleric in Yemen has drawn concern that the military and intelligence community should have seen the warning signs.

It has also raised questions about American Muslims inside and outside the military. But Adm. Mike Mullen, chairman of the Joint Chiefs of Staff, said no one should jump to conclusions.

“No one should draw any rapid conclusions, and we need to ensure that we treat everybody fairly … before this incident and after this incident,” said Mullen.

Added Gates: “In a nation as diverse as the United States, the last thing we need to do is start pointing fingers at each other, particularly when there is no basis in fact for it.”