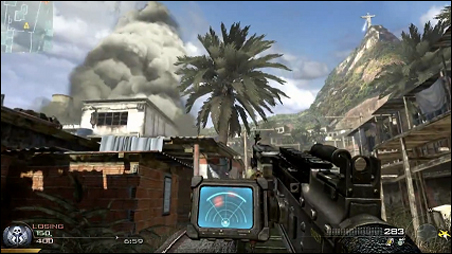 A screenshot of actual gameplay in the video game Modern Warfare 2.

Modern Warfare 2 — those three words are arguably the biggest in gaming this year, but it took just two days for problems with the game’s servers to bring the thriving multiplayer community to its knees.

Speculation Wednesday pegged the PS3 multiplayer outages to a software patch released for the game Tuesday night, but those claims were laid to rest Wednesday – on Twitter, of all places.

Robert Bowling, Creative Strategist at Modern Warfare 2 developer Infinity Ward, used his Twitter handle, @fourzerotwo, to shoot down rumors and to spread information directly to the thousands of gamers looking for answers.

Here’s a rundown of how Bowling debunked the myths and misunderstandings surrounding the outage, which was pegged to the failure of a server at Demonware, the third-party firm tasked with handling Modern Warfare 2 Playstation 3 multiplayer traffic:

In response to questions about why multiplayer went down (12:3o ET):

The amount of players on #MW2 [Playstation Network] overwhelmed the PSN presence server which updates “what you’re doing” and is essential to parties.

On when a patch for the game’s multiplayer was coming (3:00 ET):

[Multiplayer] doesn’t require a patch. It’s a server overload not a bug in the code. They’re working to have servers back up ASAP.

On rumors that Modern Warfare 2 multiplayer wouldn’t be back up til Friday (4:00 ET):

Not true. Multiplayer will be available as soon as Demonware gets the servers back online ASAP.

On what caused the Demonware servers to go down (8:oo ET):

#MW2 PS3 Update: Looks like it was the amount of connections at once that killed PSN. They’re enabling 20,000 users at a time to connect now

On when Demonware and XBox Live would fix the intermittent multiplayer issues (8:00 ET):

I know the two teams are working on it non-stop and won’t stop until it’s up for everyone. Already get @’s of ppl connecting.

Preliminary reports say the game sold over 1.23 million units in 24 hours in the UK. Using that number, one analyst is predicting global one-day sales of 7 million copies, which would easily beat the 6 million units sold in the first week by the previous record holder, last year’s Grand Theft Auto IV.