WASHINGTON — A year after a near collapse of the financial system and a historic $800 billion taxpayer bailout, Congress is reworking its terms of engagement with Wall Street.

The stakes for the financial sector couldn’t be greater. After years of relatively little regulation, Congress is considering the most significant overhaul of the industry since the New Deal on issues ranging from executive salaries and transparency for derivative trades to new powers for federal regulators to break up companies deemed “too big to fail.” 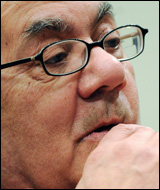 But despite the fact that the financial services industry is a virtual ATM machine for congressional campaigns, the legislation on track in Congress has Wall Street on the defensive. Financial interests won important exemptions in committee, but consumer groups rallied support to remove them on the floor.

The House Financial Services Committee today passed the last leg of a comprehensive reform package to ensure that massive financial firms never again threaten a system-wide crisis — or require taxpayers to bail out “Wall Street’s reckless actions,” as the congressional panel put it.

The bill empowers an inter-agency oversight council to identify and more strictly regulate financial firms posing a systemic risk to the system — powers that federal authorities did not have when faced with the collapse of American International Group Inc. (AIG) or Lehman Brothers in 2008.

Sweeping regulatory powers
It also gives federal regulators sweeping powers to force companies deemed too large and interconnected to downsize, even if the firm is well capitalized. The costs of shutting down a failing financial company will be borne by shareholders and creditors, rather than taxpayers, as in the case of AIG. The largest groups — companies with assets of more than $50 billion and hedge funds with assets of more than $10 billion — will be required to pre-fund a “dissolution fund” to cover any shortfall.

It’s just the beginning of hard negotiations within the Democratic caucus over how far to push the financial services industry, while not alienating a liberal base looking for stronger consumer protections.

The House Financial Services Committee aims to come to the floor next week with an omnibus bill that wraps in eight other reform bills on issues ranging from creating a clearing house for derivatives like credit default swaps to creating a new consumer protection agency. Legislation on subprime lending and executive compensation that have already been passed by the House will be included in the final package.

“We have spent more than 50 hours debating this legislation and several hundred amendments,” said Rep. Barney Frank (D) of Massachusetts, who chairs the panel. He says that he expects at least three days of floor debate on some 10 “significant amendments.”

More oversight for the Fed?
The chairman wants the House to strip out a bipartisan amendment that mandates more oversight of the Federal Reserve — a move that Fed chairman Ben Bernanke says will expose monetary policy to “short term political influence.” In response to concerns from consumer groups, Rep. Frank also aims to narrow exemptions that some groups, such as auto dealers, won during the committee markup.

“We’re facing a fierce fight,” says Ed Mierzwinski, consumer advocate for US PIRG. “What’s astonishing to me is that the special interests opposing us contributed to the failure of the financial system. They’re trying to preserve the system that failed, and Congress is listening
to them in some respects.”

Topping even the healthcare industry, finance groups have spent an unprecedented $3.8 billion on lobbying since 1998, according to the Center for Responsive Politics in Washington. At $78 million this year alone, the sector has directed more campaign funding to federal candidates and party committees than any other sector.

Impact on jobs
The US Chamber of Commerce, a key player on both healthcare and financial regulation, applauds the House Finance Committee for doing more to monitor systemic risk. But they warn that too heavy a regulatory hand could stifle jobs

“Something missing from this debate on financial regulatory reform is that the capital markets are the fuel that is used by the engines of job creation,” says Thomas Quaadman, executive director for financial reporting policy and investor opportunity at the US Chamber’s Center for Capital Markets Competitiveness. “If we create regulatory schemes that force capital markets to underperform, their job creation function will lag and that will create serious implications for years to come.”

Nor are groups on the left satisfied with the balance struck in the Financial Services panel bill. The Financial Stability Improvement Act passed today on a party-line vote, 31 to 27. But 10 members of the Congressional Black Caucus on the panel, all Democrats, boycotted the vote in a bid to focus attention on the unmet needs of minority communities.

“Since last September, we have continuously voted for bailouts and reform for the very institutions that created this devastation, without properly protecting the African American community, or small business. That stops today,” said Rep. Maxine Waters (D) of California, in a press briefing after the vote.

With the Senate caught up in a healthcare debate until the new year, the action on financial regulation is in the House. Senate Banking Committee chairman Christopher Dodd (D) of Connecticut released a draft proposal for financial regulation, but this week set up bipartisan working groups to take another run at it.