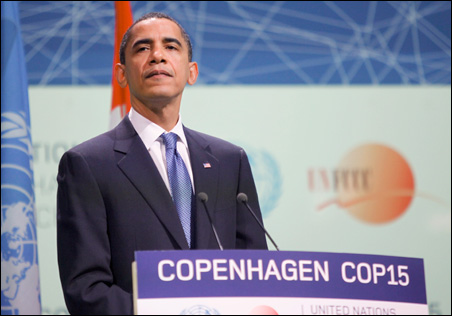 COPENHAGEN, DENMARK — President Obama cracked the whip today in a brief speech to heads of state gathered in Copenhagen, urging them to throw their political support behind the need to get a new global warming deal here before the clock runs out this weekend.

Lack of an agreement on a new climate pact in Copenhagen will not prevent the United States from moving forward on its own to chart a greener energy path and reduce greenhouse-gas emissions, he said. But he also noted that for 20 years, countries have rehashed “the same stale arguments month after month, year after year – all while the danger of climate change grows until it is irreversible.”

“As the world watches, our ability to take collective action is in doubt right now and hangs in the balance,” he said. “I’ve come here to act.”

The tenor of his comments highlights the tense, fragile negotiations on two intertwined tracks of talks here that were still under way while he was speaking.

Beyond the immediate audience in the plenary hall, the president also appeared to signal his resolve to deal with the climate issue to folks back home.

A new Washington Post-ABC News poll shows that the public’s view of how well the White House is dealing with the issue is sliding.

A clear majority also frowns on the US approach to a key issue here: aid to developing countries to help them adapt and afford green technologies. By a margin of 57 percent to 39 percent, respondents in the poll said they oppose the idea.

President Obama said today the US is ready to back a new global warming pact in which all major economies put decisive national actions on the table, that ensures countries can verify how well others are implementing those actions, and that ensures short- and long-term financing to help the least developed countries.

He acknowledged the rifts between rich countries and poor countries. “We know what the fault lines are,” he said. “We’ve been imprisoned by them for years.”

But the bottom line, he continued, is a choice between accepting an accord in Copenhagen that gives no country everything it wants, or continue to rehash “the same stale arguments.”