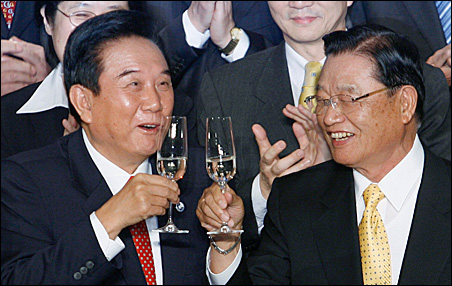 TAIPEI, TAIWAN — After a year and a half of ice-melting talks, Taiwan and China have yet to address political issues.

But even less-sensitive economic talks have now hit headwinds — a reminder of how difficult it will be to put aside a 50-year legacy of mistrust between these two longtime rivals.

China sees self-ruled Taiwan as part of its territory, to be reunified, by force if need be.

The two sides signed three new agreements Tuesday, in the fourth round of talks since the China-friendly Ma Ying-jeou took power in May 2008. The deals cover fishing workers, quality control for agricultural products, and standardizing product inspections and certifications.

But Taiwan’s representative to the talks complained Tuesday that China has not fully implemented past agreements. And the two sides nixed a fourth agreement on taxation at the last minute.

That raised eyebrows, since such deals are generally negotiated and agreed upon well in advance of formal summits like Tuesday’s.

“Sooner or later you’re going to see this kind of failure to sign agreements,” says George Tsai, a political analyst at Taiwan’s Chinese Culture University. “But we were kind of surprised.”

Taiwan’s government blamed “technical problems” for the impasse, but local media reports suggested that the Chinese side introduced last-minute changes to the deal that were unacceptable to Taiwan.

Meanwhile, a revitalized opposition mounted large-scale protests during the talks. It has slammed President Ma for conducting “black-box” negotiations with China that lack transparency and legislative oversight. And it has focused its fire on Ma’s next agenda item, a trade deal with China.

On Tuesday, the two sides agreed to start talks on such a deal, the “Economic Cooperation Framework Agreement,” with a target signing date of next summer.

The details of such a deal are still vague. Ma has said it would lower or remove cross-strait tariffs on a range of goods such as petrochemicals and auto parts.

But with support for his China policy appearing to slip and an election looming in 2012, Ma is now likely to move more slowly on cross-strait talks.

“Ma is going to take a more cautious and conservative attitude in dealing with China,” says Professor Tsai. “That’s why he’s saying that ECFA has to be approved by the parliament, with more communication with the people.”

Ma’s party, the Kuomintang, did poorly in local elections earlier this month, which some saw as a repudiation of his China-friendly policies. A recent poll by one pro-KMT television station found that 52 percent thought Ma’s policies “lean toward China too much,” with only 27 percent “satisfied” with his performance.

Faced with such numbers, Ma’s government has shifted its tone to appear stronger on defending Taiwan’s sovereignty.

“He’s already blamed by many for pushing too hard too fast, and not getting enough in return,” says Liao Da-chi, a political scientist at Taiwan’s National Sun Yat-sen University. “This view is prevalent in Taiwan, and I think he got this message.”

Taiwan official Chiang Pin-kung told Chinese officials and the media that the numbers of tourists and direct flights were below expectations. He chided China for failing to repatriate any white-collar Taiwanese criminals, as required by an agreement signed in May, and for failing to compensate Taiwan firms seeking damages from melamine-tainted Chinese products.

Taiwan’s top official on China policy Lai Shin-yuan told China’s negotiator that the hundreds of Chinese missiles deployed across from the island made Taiwanese “uncomfortable.”

The government has even released a new, pro-Taiwan rap video, with such catchy lyrics as “The Republic of China [Taiwan’s formal name] is a sovereign, independent country / Taiwan’s fate will be decided by its 23 million people.”

But Standard Chartered Bank economist Tony Phoo says that Taiwan had benefited from cross-strait deals, even if the change is slow.

“Cross-strait routes are beginning to become an important source of revenue for airlines,” he says. “And Taiwan tourism is one of the few [markets] in the region where we still see growth in overall arrivals – and that’s very much thanks to mainland Chinese tourists.”

More than half a million Chinese tourists have visited Taiwan since a tourism deal was inked in June 2008, generating about $1 billion, according to government figures.

Some 270 cross-strait flights now take off weekly. And since a ban on Chinese investment was lifted in June, Taiwan has approved 22 cases totaling $37 million, according to the island’s Investment Commission.