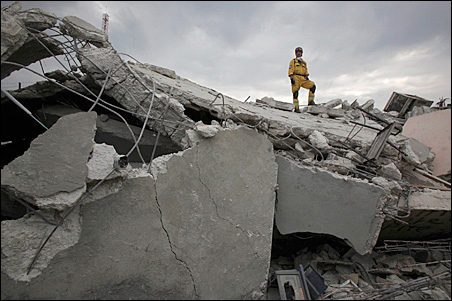 REUTERS/Wolfgang Rattay
A member of the Polish Urban Search and Rescue team stands on the roof of a destroyed house that overlooks Port-au-Prince.

PORT-AU-PRINCE, HAITI AND SANTO DOMINGO, DOMINICAN REPUBLIC — The powerful aftershock that struck Haiti early this morning incited panic among residents who are sleeping in the streets and could hinder rescue efforts as the clock ticks to save those buried alive under the rubble.

Registering at a magnitude of 6.1, it is the largest aftershock since the devastating quake a week ago Tuesday killed tens of thousands of people and left hundreds of thousands wounded and homeless.

There were no immediate reports of serious damage after the latest earthquake, centered 35 miles southwest of Port-au-Prince, but it could hamper aid efforts, which have finally gained steam after Haitians complained that food and water were not reaching their settlements

“This morning, we … ran into the street,” said an elderly woman who now sleeps with her family in a tent outside their damaged home. “[The aftershock] was really strong, really really strong. I’m afraid of this house, the tent is too close to the house, but we have nowhere else to go.”

Many aftershocks
Dozens of aftershocks have shaken the earth in Haiti in the week after the quake.

In one hotel where many foreign journalists are holed up, scores run out from the badly damaged structure each time the ground shakes. Even those with hotel rooms opt to sleep outside under the stars, in case another quake takes the shaky building to the ground.

Many Haitians are doing the same. Those whose homes were not damaged have opted to sleep outside, with little idea of what fissures may remain in their homes and what damage a strong aftershock might cause.

Carmen German, who is living in the main plaza in the colonial town of Léogâne, one of the worst-hit areas, says she is sleeping outside with her family because they have no idea if more structures will fall around them. “We are afraid,” she said.

“I left my house, because i’m scared,” said young resident David Brady, standing at a food distribution point at a golf course that has become a refugee camp run by the United State military with the help of Catholic Relief Services. “Every time I go back into my house and come out alive, I thank God. We never know when the tremors are in our head or when they’re real. Sometimes when the wind blows hard, I think it’s happening again.”

New challenges for rescue efforts
Fears of looting have ebbed after aid has arrived, via US military planes and on the congested “humanitarian corridor” between the Dominican Republic and Haiti, which was packed yesterday with trucks coming in full of generators, food, and fuel.

The aftershock also adds a dangerous new challenge for rescue workers, already working under precarious situations as they enter into collapsed structures, many of them built haphazardly.

José Mendia, a firefighter from southern Florida working on a search and rescue team, says that any earth movement puts their team at danger and makes the already near-impossible task of reaching survivors, buried now for a week, that much harder

For stories, blogs, and updates on Haiti after the earthquake, go to the Haiti topic page.