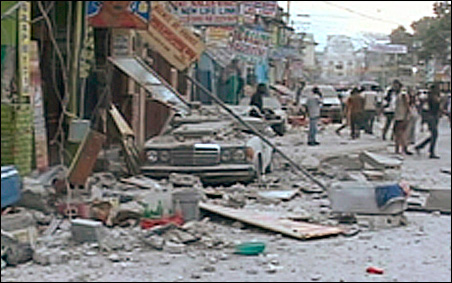 MEXICO CITY — Haiti is reeling from a 7.0 earthquake that hit 10 miles of its coast early Tuesday evening. Poor communications are making it difficult to immediately assess the extent of the damage and fatalities, but the scale of the quake’s destruction is slowly coming into focus.

Thousands of structures – from government and United Nations buildings to the millions of shacks that line the impoverished nation’s capital, Port-au-Prince – have been reduced to rubble.

An official Chinese newspaper says eight Chinese peacekeepers were killed and that 10 others are missing. France’s foreign minister said the head of the UN peacekeeping mission was apparently among the dead.

Few countries are as vulnerable to natural disaster as Haiti, the poorest nation in the Western hemisphere. Wracked by political instability and poverty, and hammered by a series of hurricanes in 2008, Haiti faces a tough recovery ahead. But as the nation digs itself out of the confusion and rubble, there is a bright spot: With the UN peacekeeping force already on the ground and an army of international aid organizations with a long presence in Haiti, recovery efforts might be more coordinated and well-oiled than in other disaster zones.

“The good news is that there are many, many organizations in Haiti,” says Elizabeth Furst Frank, vice president of global program operations at AmeriCares, which is sending medical aid to Haiti, where the US-based group has had a presence for 25 years. “So you’ll see a faster response faster than in Myanmar after the cyclone, because so many NGOs are well-established and will be responding in any number of ways.”

The earthquake, reported as the worst in Haiti in 200 years. Most of the initial images, such as photos of the collapsed national palace in the capital, have been sent through social media outlets such as Facebook and Twitter.

Pooja Bhatia, a correspondent for the Institute of Current World Affairs in Port-Au-Prince, says that houses have been flattened – including those next to hers – and that telephone lines are down and transportation cut off. But she says people are not panicked. There is “lots of singing actually and waiting,” she said via e-mail Tuesday night. “Many are outside, under the stars.”

Bernice Robertson, a senior analyst in Haiti for International Crisis Group, said in an e-mail that her colleague “observed major damage to several buildings, which crumbled along the Delmas Road, a major street in the Metropolitan area. He observed scores of people injured who could not help themselves. The police and [UN group] MINUSTAH are out in their numbers but the situation is overwhelming,” she wrote.

In Washington, US officials held an emergency meeting on its response. “We stand ready to assist the people of Haiti,” President Obama said. US Secretary of State, Hillary Clinton, said “the United States is offering our full assistance to Haiti and others in the region. We will be providing both civilian and military disaster relief and humanitarian assistance.”

Ms. Furst Frank says the response will be slowed by the absence of a commercial market in the country – such as a network of megastores to support recovery efforts – and few government resources. “Haiti is extremely vulnerable to any disaster because the population lives so close to the edge,” she says.

But that the non-profit infrastructure in place to help Haiti’s woes will certainly make a difference. Special UN envoy Bill Clinton has worked over the past year to coordinate efforts of local grassroots organizations, she says. Haiti has also long been dependent on foreign aid and NGOs. UNICEF has been working in Haiti since 1949. Doctors Without Borders has teams on the ground. USAID said it will be sending up to 72 people to help in rescue and recovery efforts.

And peace-keeping missions will also be crucial. “The UN peacekeeping force will give Haiti an advantage,” says Mark Schneider, the senior vice president for International Crisis Group in Washington. “It permits them to respond relatively quickly.”