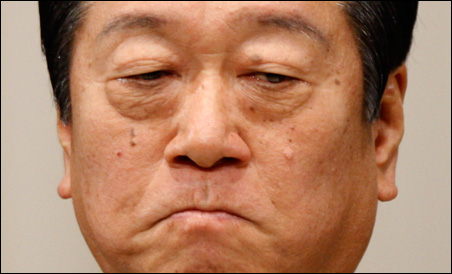 TOKYO — Japan’s ruling party is pushing back against a legal probe that could threaten its ambitious plans to reform the country’s politics.

The Democratic Party of Japan rode to power last August on a wave of populism. It vowed to take power away from bureaucrats and give it to the people’s elected representatives, part of its lofty goal of making government more accountable and transparent.

But now, the party’s main powerbroker, Ichiro Ozawa, is under investigation over allegedly accepting bribes and buying land with the money. Prosecutors raided his offices and arrested three former secretaries, and will question Ozawa himself on Saturday.

With its key strategist under a cloud, the party is casting the probe as the revenge of the bureaucrats for the new government’s bid to curb their clout.

Ozawa himself lashed out against the probe in an address to party members last weekend, saying it “cast a shadow over the nation’s democracy” and suggesting prosecutors may be politically motivated.

In a Jan. 15 interview at her office, Kuniko Tanioka, a DPJ upper house legislator, said she found it “puzzling” that prosecutors leaked so many details about an ongoing probe to the media. She suggested that some in the judiciary were trying to “extend some influence over politics.”

“The bureaucracy looks at themselves as the victims of the change of government,” said Ms. Tanioka. “[They’re] forgetting the fact that they were themselves victimizing the people, and forgetting that the government is not theirs.”

As one example of bureaucrats’ past sins, she cited the recently revealed, secret deal by which Japan agreed to allow nuclear-armed United States vessels enter Japanese ports during the Cold war. As recently as last year, bureaucrats brought before the Diet insisted that no such deal existed, Tanioka said. “In other words, they were betraying the people.”

Tanioka said the bureaucracy clings to an outdated mindset that has no place in 21st century Japan. “They still don’t understand that the people are the rulers of the country,” said Tanioka. “They are like tradition-worshippers — but society has changed drastically.”

Locking the bureaucrats out
Since World War II, business-friendly coalitions led by the Liberal Democratic Party have governed through backroom deals and cozy relations with bureaucrats and big contractors. Often, LDP-appointed ministers were only figureheads, with the bureaucrats holding the real power.

Japan’s new, center-left government promised to change that. The government’s most visible champion of people power is Deputy Prime Minister Naoto Kan, a one-time human rights and environmental activist. He famously wrested from bureaucrats evidence of the spread of tainted blood when he served as health minister in the mid-1990s.

Kan was recently appointed to double as finance minister, a move widely seen here as a bid to tame one of Japan’s most entrenched and powerful bureaucracies.

In Prime Minister Yukio Hatoyama’s own e-mail letter early this month, he said the party had made progress in establishing more direct democracy. “The people’s strong desire to change politics led to the change of government last year, allowing us to finally come to the starting line of a politics in which you, the people, will play the main roles.”

Hatoyama cited as one example the scrapping of permanent vice-ministers’ meetings, “a tradition symbolic of the bureaucrat-led politics that had continued since the Meiji era.”

The DPJ plans to increase the number of legislators appointed to vice-minister posts, increasing the clout of the people’s direct representatives. Decisions are now made by such political appointees, with bureaucrats locked out of the room – a big change from the LDP days.

The bureaucrats have begun to grumble about the new order. In an article on Jan. 13, the Yomiuri Shimbun quoted anonymous bureaucrats from three ministries, all complaining about their reduced status, and more desk work.

“The ministry can’t make decisions for hours because the three top-ranking politicians won’t let any bureaucrats in,” said one. “We now have to report every important matter to the minister and wait for his approval – it’s time consuming,” griped another. “Nothing can be done without the instructions of the three top-ranking politicians,” said a third.

Other commentators have suggested that the DPJ may have gone too far in demonizing the bureaucracy, since it ultimately must rely on bureaucrats to implement its policies.

The DPJ is practicing “a kind of populism to appeal to the public by bashing the bureaucrats,” says Mikitaka Masuyama, of the National Graduate Institute for Policy Studies in Tokyo. “But in the long run, politicians and bureaucrats have to cooperate with each other.”

But politicians losing appeal, too
The DPJ’s revolution could yet prove short-lived. The Ozawa scandal, and the DPJ’s mixed performance in power, have taken a toll: Polls this week showed approval ratings for the party had plunged to the low to mid 40s, from more than 70 percent after the party’s election triumph last year.

The party faces an Upper House election in July that will test its hold on power. If Ozawa is charged and forced from his position as party secretary general, the DPJ would lose its “shadow shogun,” the man credited as both the strategist who guided it to power, and the strongman who can enforce party solidarity.

The DPJ’s Tanioka said the first half of this year would be a critical transition period, as the party establishes its “grip” over the bureaucracy and government. Despite the current troubles, she remains confident of victory in July, saying the public would give them more time to produce results.

“The Japanese people are very patient,” said Tanioka. “They know that the rust and scars have accumulated for over 50 years, and the clean-up job is going to take some time.”