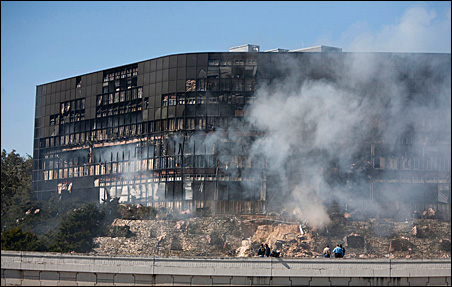 Authorities said Thursday evening that a body believed to be the pilot had been recovered from the charred seven-story building, which contains Internal Revenue Service offices. All indications are that the plane was flown by Joseph Andrew Stack, a 53-year-old software engineer from Austin with an apparent long-standing grudge against the IRS.

Even though Austin Police Chief Art Acevedo called the apparent attack on a federal office building “a criminal act by a lone individual,” the scene of smoldering steel and crumbling concrete in suburban Austin drew immediate comparisons to the 1995 Oklahoma City bombing and 9/11, and has led many to call Thursday’s crash an act of domestic terrorism.

This was a “deliberate and intentional attack against a federal building,” said US Rep. Michael McCaul (R-Tex.) at a press conference. When asked by a reporter if he consider it terrorism, Representative McCaul said, “it sounds like it to me.”

“The incident has “revealed a weakness we have been aware of since 9/11…. It’s an issue that Congress definitely needs to look at,” he said.

The Piper Cherokee PA-28 Dakota, one of the smallest airplanes manufactured today, struck Building 1 at the Echelon office complex at 9:56 a.m., 16 minutes after taking off from an airfield in Georgetown, Tex. About 200 IRS employees work inside the office building.

Witnesses said they saw the plane flying low overhead before accelerating and possibly diving before the collision. Thirteen employees were injured and treated at the scene. Two people were seriously injured and hospitalized. One federal employee remained unaccounted-for as of Thursday afternoon, according to Chief Acevedo. “The prospects are not very positive for that person at this time,” he said.

“Heroic acts on the part of federal employees” may have prevented more people from being killed or injured, said Acevedo. “We’ve been blessed because things could have been a lot worse.”

The Federal Bureau of Investigation has taken the lead on the inquiry into Thursday’s crash, and it’s also looking into whether Mr. Stack is responsible for setting fire to his North Austin home before plowing his airplane into the federal building.

An antigovernment screed apparently written by Mr. Stack and posted on a website registered in his name prior to Thursday’s incidents offered many clues into what motivated Thursday morning’s events.

“I know I’m hardly the first one to decide I have had all I can stand,” Stack apparently wrote. “Well, Mr. Big Brother IRS man, let’s try something different; take my pound of flesh and sleep well.”

The company that hosted the Web site took it down this afternoon at the request of the FBI.