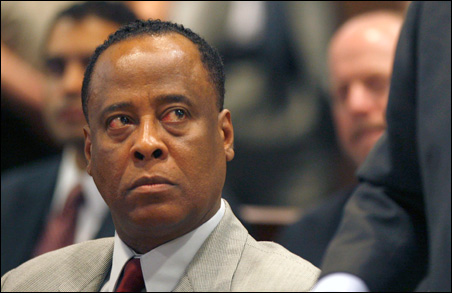 LOS ANGELES — The trial of Michael Jackson’s doctor, who was charged Monday with involuntary manslaughter and who pleaded not guilty, has all the makings of another celebrity courtroom drama. But it could also set standards for future cases of deaths allegedly resulting from doctors administering drugs improperly.

Dr. Conrad Murray, who was with Jackson when he died June 25 in his Los Angeles home, is accused in the complaint filed Monday of “unlawfully, and without malice,” killing his patient by acting “without due caution and circumspection.” Los Angeles County Superior Court Judge Keith L. Schwartz set bail at $75,000.

If convicted, Dr. Murray faces up to four years in prison.

The case against Murray will depend largely on the specifics of the autopsy, which remains sealed, experts say. The complaint contains no details on Jackson’s death. Murray reportedly gave Jackson propofol, a powerful anesthetic, to help him sleep some hours before his death. On Monday, the judge forbade the doctor from prescribing heavy sedatives, including propofol, to his patients.

“Take away the celebrity factor here and physicians will be watching for what is the standard relied on,” says Jessica Levinson, adjunct professor of law at Loyola Law School in Los Angeles, adding that she will be looking for “new or interesting legal frameworks with respect to affirmative defenses for physicians administering medications that can result in death.”

The argument for gross negligence and whether Murray “played fast and loose with the requirements for administering propofol, will be the main thrust of the case,” says Robert Pugsley, a professor at Southwestern Law School in Los Angeles.

The charge against Murray appears to be based on the conclusion that his “conduct demonstrated no intent to cause death to his patient, but that his prescribing and administration practices were far worse than breaches of the standard of care, and rose to the level of actionable criminal negligence if not, possibly, reckless conduct,” says Bruce Cranner, member of the Medical Liability Committee of DRI, the largest US civil defense attorney association.

The defense, on the other hand, will have to show that Murray’s actions were reasonable and that he acted with circumspection.

In high-profile celebrity cases such as the O.J. Simpson trial, jury selection is more than half the battle, says Ms. Levinson. “Because of Jackson’s unprecedented fame, this will be a tricky case to get jurors for,” she adds.

“Mr. Jackson’s many devoted fans are hungry for answers and are looking to the justice system for these answers, and for closure to his tragic life story,” Mr. Cranner notes.

The defense will thus need to separate out Murray from the passions swirling around the case, lawyers say.

“Although the world worships Michael Jackson and deeply mourns his passing … this case is only about whether or not Dr. Murray caused his death,” says Elizabeth Kelly, a Cleveland-based criminal attorney. “His guilt or innocence should not be a symbol of anything, his indictment should not be in order for prosecutors to make a statement about deterrence, but rather this should be a statement that our legal system is based on justice and nothing else.”

Case focuses on propofol use
Both sides are bound to bring lots of expert medical witnesses, and much of their testimony will address the use of propofol in a home setting, say observers.

Because the drug is such a powerful anesthetic, it is customary to administer it only in a hospital setting where there are backup machines that can deal with irregularities or problems – devices such as heart monitors and breathing machines.

However, it is not illegal to administer propofol at home, says Ellyn Garofalo, a criminal defense attorney who represented a doctor in the Anna Nicole Smith case.

“The prosecution will have to show that Murray gave him too much propofol and knew it, or that the propofol interacted with other drugs already in Jackson’s system,” says Ms. Garofalo. “That will depend on what the coroner found in the autopsy and won’t come out until the trial.”

Material from Associated Press was used in this report.