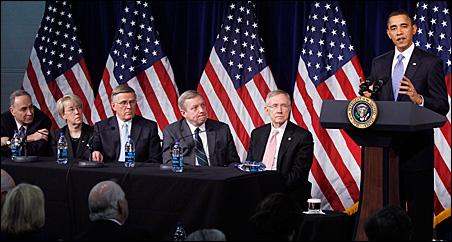 WASHINGTON — On the eve of the swearing-in of Scott Brown as the 41st Republican senator, President Obama tried Wednesday to rally Senate Democrats worried that they might lose their midterm elections – and sometimes got an earful in return.

In a choreographed but not scripted meeting – the president did not use a TelePrompter – Senate majority leader Harry Reid recognized the most embattled senators in the caucus to ask questions before television cameras. It gave Democrats and the president an opportunity to say to angry swing voters: We get it.

Even before last month’s Massachusetts Senate election, Democrats faced the prospect of losing seats in the House and Senate. Historical trends show that the president’s party typically loses seats during the first midterm election.

But Senator-elect Brown’s win in liberal Massachusetts – for the seat once held by Sen. Edward Kennedy – showed how deep voter disaffection with the current government went as unemployment tipped 10 percent and Washington was seen as focusing elsewhere. The result set off alarm bells among Democratic senators seen as the most vulnerable in 2010 elections.

With his appearance Wednesday, Mr. Obama sought to stem the mounting anxiety within his party. He urged Democrats to turn off cable news and blogs – get outside of “this echo chamber where the topic is constantly politics” – and focus on helping people.

“I would just suggest to this caucus, if anybody’s searching for a lesson from Massachusetts, I promise you the answer is not to do nothing,” he said.

Eight of the nine Democrats who spoke on camera Wednesday are up for reelection in 2010. Several – including Senator Reid of Nevada, now polling in the 30s – are in the fight of their lives.

Sen. Arlen Specter
Sen. Arlen Specter (D) of Pennsylvania – polling 9 percentage points behind former GOP Rep. Pat Toomey – was the first on the list of those invited to pose questions. Senator Specter asked whether Obama would back a bid to revise or even revoke treaties that “give China such an unfair trade advantage.”

American workers have lost at least 2.3 million jobs from 2001 to 2007 as a result of the trade imbalance with China, which violates international law with subsidies and dumping, he said. “They take our money, and then they lend it back to us, and own, now, a big part of the United States.”

No, the president said, he would not back revoking trade relationships with China but will continue to enforce trade agreements “in a much more serious way.”

“Our future is going to be tied up with our ability to sell products all around the world, and China’s going to be one of our biggest markets,” Obama added.

Sen. Michael Bennet
Sen. Michael Bennet (D) of Colorado – appointed by an unpopular governor and facing primary challengers – told the president that “this place looks broken to the American people,” especially after the healthcare discussions. “You’ve got here an institution that increasingly is not adapted to the demands of a hugely competitive 21st-century economy.”

Obama said he took some blame for a healthcare process that looked “painful and messy,” especially at the rush to complete a bill in 2009. Transparency is important, he said. “When we were fighting through all these filibusters and trying to get it done quickly, so that we could pivot and start talking about other issues that were so important to the American people, some of that transparency got lost. I think we paid a price for it.”

Sen. Blanche Lincoln
Sen. Blanche Lincoln (D) of Arkansas – polling at 33 percent, according to a survey from Public Policy – quoted a small-businessman in Arkansas (“a good Democrat”) who ”fears that there’s no one in your administration that understands what it means to go to work on Monday and have to make a payroll on Friday.”

“He wants results. He wants predictability,” she said.

A centrist, Lincoln also asked Obama if Democrats were willing not only to reach out to Republicans but to “push back on our own party [on] people who want extremes.”

In a preview of a campaign line for centrists, Obama laid out a two-fold strategy.

First: Not to go back to what the Republicans did for the last eight years. “I don’t know why we would expect a different outcome pursuing the exact same policies that got us into this fix in the first place,” he said.

But second: Not to fall back on New Deal era fixes, either.

“Blanche is exactly right: We’ve got to be nonideological about our approach to these things,” he said. “We’ve got to make sure that our party understands that, like it or not, we have to have a financial system that is healthy and functioning, so we can’t be demonizing every bank out there. We’ve got to be the party of business, small business, and large businesses because they produce jobs. We’ve got to be in favor of competition and export and trade.”

Sen. Evan Bayh
Sen. Evan Bayh (D) of Indiana, another centrist, pressed Obama on deficits and rising debt and asked: “Why should the Democratic Party be trusted? And are we willing to make some of the tough decisions to actually head this country in a better direction?’

“Well, I’ll tell you why the Democratic Party should be trusted: because the last time this budget was balanced, it was under a Democratic president, who made some very tough decisions,” Obama said to sustained applause.

Until this week, two-term Senator Bayh was a shoo-in for reelection. But reports that former Sen. Dan Coats (R) of Indiana is considering a challenge could make that race suddenly competitive.

“Evan Bayh has $13 million in the bank, but he is getting a real opponent,” says Jennifer Duffy, who tracks Senate races for the Cook Political Report. “Dan Coates has got his work cut out for him, including two years he spent as a lobbyist. But that’s a real race now, and it wasn’t yesterday. This was out of the blue.”