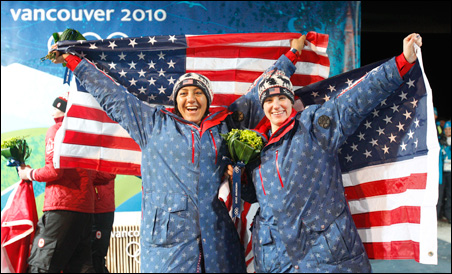 WHISTLER, BRITISH COLUMBIA — A year ago, Erin Pac and Elana Meyers weren’t even on speaking terms. Tonight, when they step up to the podium together, they’ll be celebrating not only their bronze medals but a friendship redeemed by their shared Christian faith.

“To overcome what we overcame – I’m pretty sure no one would have thought we would be here today,” said Meyers last night. “There’s no one I would rather be here with than Erin.”

Their success was deeply personal, but it was also part of a very public North American sweep of the two-day competition at Whistler Sliding Center – an extraordinary feat in a sport where Germans are virtually always on the podium. The fast and challenging track gave a clear home-field advantage to the Canadians, who took gold and silver and set a new track record in the cold, drizzly weather. But Pac and Meyers were able to figure it out well enough to hang in there for bronze.

“This track is very tricky, and with the limited number of runs we’ve had, I had quite a few pretty big mistakes that cost me a lot of time,” said Pac, who clocked the second-fastest times on all but the fourth and final heat. “I’m just happy I made it down on all four runners, because not everyone did.”

Sleds tipping
German driver Cathleen Martini, who dominated the World Cup season this year, was within striking distance of the podium when she got too high on a turn midway down and couldn’t recover. The sled tipped over, throwing her brakeman out the back before coming to a halt. Both athletes walked away from the crash, which drew cheers from the enthusiastic crowd, but the fact that the overall World Cup champion couldn’t make it across the finish line underscored the difficulty of the track, where the two-woman teams reached speeds of 91 m.p.h.

“It’s so hard to watch Martini, who’s had a phenomenal season, lose a medal like that,” said driver Bree Schaaf of the USA-3 team, who got to know the Germans on the World Cup tour this year. “These are all our friends.”

Schaaf teamed with brakeman Emily Azevedo to finish fifth, just 0.01 seconds ahead of the USA-1 team of Olympic medalist Shauna Rohbock and Michelle Rzepka. Pac and Meyers were 0.41 seconds ahead of Germany’s top team, and lost silver to Canada’s Helen Upperton and Shelley-Ann Brown by 0.27 seconds on the final run.

That might have been Meyers’ fault, but not because of what she did on the track.

“Shelley-Ann Brown is one of my best friends, and I told her before the race, ‘I need you guys to beat Germany because we need to stay up on the medal count,’ ” said Meyers, her thumbnails painted with American flags. “I didn’t think she would pass us,” she added with a chuckle.

Meyers’s dad, Eddie, a former NFL player who instilled in her the need for discipline and perseverance in sport, ran up breathless to embrace his daughter after the race. Her mom also snuck in a big squeeze – and a few tears – before Meyers was whisked away for an endless night of telling the world exactly how it feels to have accomplished what they did.

For Meyers and Pac, their medal is a bonus after coming through a tough few years well enough to thoroughly enjoy walking side by side into the opening ceremonies.

When asked why they were able to nail their runs while the two other US teams struggled, Pac answered: “I fully believe that God was with us every step of the way.”

“Faith is something we both share,” agreed Meyers, adding that it took “constant prayer” from both of them to work out the tensions that arose between them. “We had three years of ups and downs – God has really brought us through that. It is really amazing; He is really amazing.”

Read how other Olympians rely on their faith, too.

Change of sled
At the beginning of this season, Meyers was slated to push for Rohbock, a veteran driver. But hampered by a hamstring injury, she got bumped off the USA-1 sled.

“I basically got demoted,” says Meyers, who is grateful now that she was put with Pac.

The two now do everything from shopping to painting their nails hot pink to eating Twizzlers together.

“Those were four of the most exciting, most fun bobsled runs I’ve ever had,” said Meyers.

Echoing athletes and fellow medalists from Bode Miller to Bill Demong, whose Nordic combined team won silver, both Meyers and the Canadians showed that focusing on enjoying the moment brings good results.

“In Torino … I didn’t have fun and I didn’t get a medal,” said Canada’s Upperton. “So I said to Shelley, you know what, we are going to have a blast. We’re at home and these people love us. Let’s go have fun.”

Now they’re walking away with good memories and a silver medal in their pocket, their ears ringing with a home crowd that forgot its typical modesty in the din of cowbells.