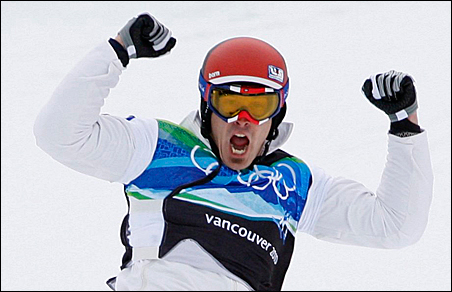 REUTERS/Mark Blinch
Seth Wescott celebrates after crossing the finish line to win the gold medal during the men’s snowboard cross on Monday.

WHISTLER, BRITISH COLUMBIA — For the second time this Olympics, the United States has won a gold medal.

For the second time this Olympics, the United States snatched it from the hand of Canada.

In a thrilling snowboardcross final Monday, American Seth Wescott took gold by less than the length of his board, coming from far behind to pass Canadian Mike Robertson on one of the final jumps before the finish.

Earlier, at the same venue, American mogul skier Hannah Kearney – the last woman to race – took gold away from Canadian Jennifer Heil with what she called the best run of her life.

The Canadian promise to “Own the Podium” has run into a roadblock, it seems: those overbearing blokes to the south.

Opening ceremonies Friday night were, at least in part, an effort to distinguish Canada in the international mind – to leave no doubt that Canada is not America. And so it did.

But the sports part of the program has not gotten off to the fast start many had hoped for.

Heil, one of Canada’s apparent gold-medal locks, finished with her respectable but unforeseen silver. And Monday, alpine skier Manuel Osborne-Paradis, a medal favorite and one of the faces of the Games for Canadians, finished a disappointing 17th in the men’s downhill.

Robertson’s silver in snowboardcross will be most disappointing in the manner of it. American Nate Holland wiped out early in the race, slowing down countryman Wescott and staking Robertson – who was ahead of the scrum – to a huge lead.

Wescott’s advantage, it turned out, was that the congestion happened early in the race, giving him time to make up the difference on Robertson. A gold medalist in Turin, Wescott never made a dramatic move, but rather chewed up the distance between Robertson second by second.

By the time the two were entering the final jumps, Wescott had pulled even, and his momentum helped him pull into the lead by the finish.

For Wescott, coming up big in the biggest races has become his M.O. “For me mentally, I need something big to fire me up,” he said before the Games started.

The fact that this is the Olympics is “the easiest motivation in the world,” he added.

The final was a dramatic end to a dramatic day of racing, as the top Americans and Canadians avoided pileups and upsets to progress through the qualifying rounds. In the end, the US and Canada took four of the top five places, with a Frenchman finishing third.

The rivalry between the US and Canada is a natural one, not just because of the geography, but because both countries’ success in the Winter Olympics is based predominately in new sports like snowboarding and short track speedskating.

That means the two will see a lot more of each other in the days ahead – and it means that if Canada doesn’t top the medal table come closing ceremonies, America might well be to blame.

Mark has been covering the Olympics since 2002, making this his fifth Olympic