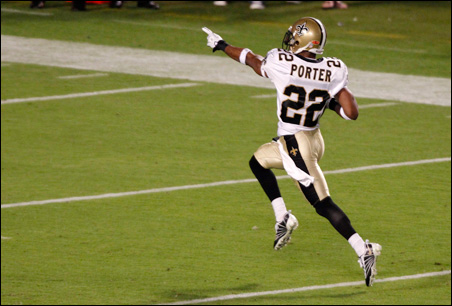 REUTERS/Carlos Barria
New Orleans Saints cornerback Tracy Porter runs back an interception for a touchdown against the Indianapolis Colts in the fourth quarter.

MIAMI — In a sense, the New Orleans Saints Super Bowl XLIV victory was closer than the 31-17 score would indicate.

For most of the game, Colts quarterback Peyton Manning marched the team down the field virtually at will. Colts running backs gashed the Saints repeatedly for large games. And until 3:12 left in the fourth quarter, the first overtime game in Super Bowl history seemed a distinct possibility.

But in all the most important ways, the game was a blowout. At virtually every key moment, the Saints outplayed and outcoached the Colts, and for that the Saints own a Super Bowl, a piece of history, and no small amount of joy for New Orleans.

Football is always a game of accumulated moments, but this Super Bowl in particular resolved itself into a collage of three plays and decisions that decided the title.

1. Conservative Colts
The Colts defense was hooting like Vikings, running up the field, arms raised and triumphant. On four consecutive plays from within their 10 yard line, the Colts defense had stuffed the most prolific offense in football.

With just under two minutes remaining in the first half and a 10-3, the defense was putting the ball in the hands of Manning – the master of the two-minute drill. In their two previous playoff games, the Colts had scored a gaudy 21 points in the last two minutes of the first half.

The ball was on the one yard line, but the Colts had already driven 96 yard earlier in the half for their only touchdown. It was the perfect opportunity to deliver a hammer blow.

They would be receiving the ball first in the second half. The way the Colts had been moving the ball, it was not inconceivable that the Saints could be behind 24-3 before they touched the ball again.

Instead, the Colts tried to run out the clock, running the ball three times. They failed. The Colts punted and the Saints promptly kicked a field goal. In the space of two minutes, the Colts had let the Saints off the hook.

Not only was Saints’ Coach Sean Payton not penalized for going for it on fourth down, he was rewarded. He got his three points in the end and he got it without Manning throwing a pass in response.

It was the first time that the Saints aggressiveness paid dividends.

2. The onside kick
Having won his first gamble, Payton decided to double down. Having avoided giving up any points to the Colts late in the first half, he made his bid to prevent them scoring at the start of the second.

In a sense, the decision was made from weakness. Like New England Patriots’ Coach Bill Belichick, who went for it on 4th-and-2 from his own 28 yard line, Payton knew his defense had yet to stop Manning.

The two Colts punts in the first half had come from an outrageous third-down drop by Colts receiver Pierre Garcon when he was wide open and could have gained 30 yards and their conservative calls at the end of the half.

But the genius of Payton was in his success, fortunate though it was. A Colts player – sure-handed receiver Hank Baskett, no less – was in perfect position to catch the onside kick, giving the Colts the ball 35 yards from the end zone. But he misplayed the kick, allowing the Saints to recover.

Though the Colts would regain the lead later in the game, the kick changed the tone of the game. The Colts defense, which had limited the damage against the Saints in the first half, was pulled apart by Saints quarterback Drew Brees and his arsenal of receivers.

Once again, the Saints were rewarded for their aggressiveness and the Colts appeared timid by comparison.

3. The interception
Saints cornerback Tracy Porter could have been wrong when he guessed that Manning was going to try to hit Reggie Wayne on a quick slant with 3:12 remaining. With the game at 24-17, and the Colts driving the mistake could have allowed the Colts to march nearer the end zone and a tie game.

But Coach Payton had set the tone for the Saints, not only in this game but before the Super Bowl even began. Sacrificing $250,000 of his own salary to lure defensive coordinator Gregg Williams to the Saints, Payton had staked the Saints season on Williams’ brand of defensive football: unabashedly brash.

“Guys who are afraid to make plays don’t last long in the NFL,” said Gregg Williams after the game.

Porter jumped the quick slant, intercepted Manning, and returned it for a touchdown.