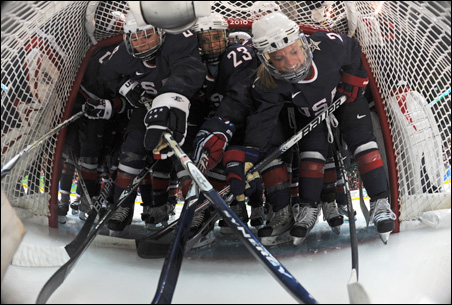 REUTERS/Alex Livesey
The U.S. team huddles around the net during a pregame ritual before their semifinals game on Monday.

VANCOUVER, BRITISH COLUMBIA — So, at last, the USA-Canada Olympic women’s hockey final we all expected is now officially set for Thursday, but one must honestly ask: What was the past week or so for?

In their eight games during the past 10 days, the US and Canada beat their opponents by a combined score of 96-4. In three of those games, the US or Canada had more goals than their opponents had shots, meaning they technically could have played without goalies and still won.

This is not progress. Quite the opposite, actually.

In 2006, there was the hope that a new day was dawning in women’s hockey when Sweden beat the US, 3-2, in the semifinals of the Turin Olympics. Back then, eight years after women’s hockey made it’s debut, it appeared that the rest of the world was at last gaining on the Americans and Canadians.

Fast forward to Monday, when history repeated itself and the US and Sweden faced off in an Olympics semifinal again. Except that history didn’t repeat itself. Not remotely.

In the other semifinal, Canada won a nail-biter, 5-0, outshooting Finland 50-11. Had Finnish goaltender Noora Raty not done a passable impression of Hadrian’s Wall, Finland would have done no better – and perhaps worse – than their Nordic neighbors.

A noble goal
The International Olympic Committee has very consciously made the decision to promote women’s sport around the world. In certain cases, this has moved a sport forward enormously.

Women’s soccer is virtually unrecognizable from what it was when it first entered the Olympics. Once dominated by the US, China, and Norway, it has blossomed into a game of real competitive balance from Brazil to Germany to Canada.

It is this transformation that the Olympics sought to have with women’s hockey. But 12 years into the attempt, things seem to be going the wrong direction.

Why the world is not getting better
The numbers clearly favor North America. According to The Canadian Press, more than 85,000 women play the sport in Canada, while some 60,000 play in the US. Sweden, by comparison, can choose from a pool of about 5,000 female hockey players. China and Slovakia? Fewer than 1,000.

It’s not that the rest of the world has regressed compared with the US and Canada, said Bob Nicholson, president of Hockey Canada. Instead, “we’ve taken two steps forward, and they’ve taken one step,” said Nicholson on Canadian television.

He noted that, unlike European teams, the US and Canadian teams assemble a year before the Games start.

The best keep getting better – and they have to, to keep up with each other. But the rest of the world is clearly not.

In the end, we will have two competitive games worth watching Sunday. Problem is, it took 10 days – and no suspense whatsoever – to get there.