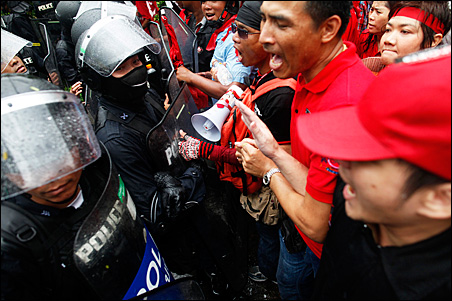 BANGKOK, Thailand — Red-shirted protesters in cars, pickup trucks, and motorbikes snaked around the Thai capital on Saturday, the latest in a series of antigovernment demonstrations. Police estimated that 65,000 people had joined the convoy, which stretched for several miles.

But viewers of Thailand’s TV stations, the most popular source of news, were told that 25,000 attended. As usual, pictures of protesters were bracketed by statements from government officials. No airtime was given to ordinary protesters. And last week when protesters dumped blood on the prime minister’s office and home, pro-government media hyped up the health risks and the ethics of wasting human blood, while antigovernment media focused on the symbolism of Thais willing to shed blood for the cause.

As the latest antigovernment protest enters a second week, Thailand’s mainstream media faces fresh questions over its neutrality, which has already been tested by four years of political turmoil and polarization. Critics say bias is acute on free-to-air TV channels, which are all under government or military control.

Partly as a result, more Thais are turning to partisan sources of news such as cable TV, community radio, and the Internet. This could deepen the political divide and make it harder to find common ground.

On Monday, protest leaders again declined an offer of peace talks with two deputies of Prime Minister Abhisit Vejjajiva, insisting that he must attend in person. Mr. Abhisit has refused to step down and call elections, as protesters have demanded over the past week.

Accusations of media bias have caused friction in Thailand before. In 1992, when troops fired on demonstrators in Bangkok, government-run channels reported that communists had been fomenting unrest. An antiroyal fake photo in a newspaper in 1976 sparked an Army-organized massacre of students.

In recent years, rival activists have pressured TV channels over their coverage and harassed reporters who underplay the size of their demonstrations. As a result, some leave out crowd estimates in their coverage. “We don’t want to have trouble. We avoid the figures,” says a news editor at a TV station.

For each viewpoint, a TV station

Further polarizing the issues, each protest group operates its own media outlet. The red shirts, who draw their support from rural and working-class Thais, operate People’s Channel TV, which broadcasts nonstop coverage of the protests. Rival yellow-shirt protesters, who appeal mostly to middle-class voters, get their news from ASTV, a satellite channel. Both stations are overtly biased.

But the spread of new media is providing a check on the government’s control of the message, says Supinya Klangnarong, a free-media campaigner. She says mainstream TV channels no longer have the power to distort the facts as blatantly as they did in 1992 as they must compete with other sources of information, including images and texts spread via mobile phone and the Internet.

“I think [the government] realizes that if they push too much control or manipulation, people will not believe it anymore,” says Klangnarong.