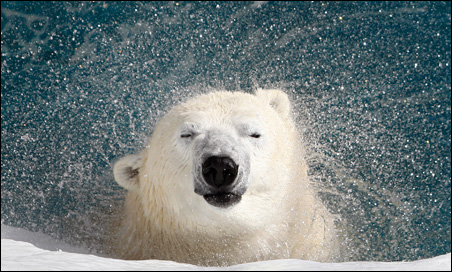 REUTERS/Mathieu Belanger
The 200,000 square miles of designated “critical habitat” in the U.S. for polar bears is mostly sea ice that is rapidly melting.

A US-led plan to stop international trophy hunting of the polar bear and a flourishing trade in polar bear parts was defeated Thursday at a meeting of the Convention on International Trade in Endangered Species (CITES) in Doha, Qatar.

It was the second major defeat of the day for the United States – including a sudden vote and refusal by the 175-nation CITES group to ban international trade in Atlantic bluefin tuna, which is a popular sushi dish worldwide, but especially in Japan.

But while the tuna defeat was a major blow – because the decline was so obvious, and reversing trade it in would so obviously help – US officials said the polar defeat was just a first step.

“It’s not uncommon that the first effort to list a species is not success,” Tom Strickland, assistant secretary of the Interior for Fish and Wildlife and Parks told reporters in a teleconference. “It requires a sustained effort. … So while we are disappointed with the votes today … we are heartened by the support around world to up-list the polar bear and bluefin tuna.”

For the polar bear, he said, the problem is that their 200,000 square miles of designated “critical habitat” in the US is mostly sea ice that is rapidly melting. That effect of climate change harms the bears’ populations. But trophy hunting and the trade in bear parts puts “great pressure” on the bears, Mr. Strickland said.

Among some environmentalists, there was a bit less disappoint about the polar bear defeat. CITES, they noted, is a conference that is about protecting animals through prohibiting trade – and protecting polar bears was considered a steep hurdle because their primary threat is climate change.

But for some environmentalists the defeat stung.

“While there has been a lot of positive momentum in polar bear conservation recently, this is a real setback,” says Andrew Wetzler, director of the Natural Resources Defense Council’s Wildlife Conservation Project. “It keeps some the most important populations of polar bears squarely in the cross hairs.”

Polar bear populations worldwide will decline by more than 70 percent in the next 45 years as global warming melts their habitat, the US Geological Survey estimated in 2007. The US listed the polar bear as threatened under the Endangered Species Act in 2008.

Canada, which still allows 300 polar bears a year to be hunted for international trade and trophy hunting despite signs of population pressures, strongly opposed the US-led measure.