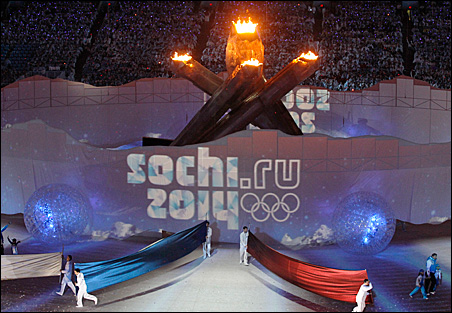 REUTERS/Lucy Nicholson
A tribute to Sochi, Russia, site of the 2014 Winter Olympics, is unveiled during the closing ceremony of the Vancouver 2010 Winter Olympics.

MOSCOW — The Vancouver Olympics are over and the torch now passes to Sochi, the subtropical Soviet-era seaside resort town that may be the most unlikely venue ever designated to host a major winter sporting event.

The Kremlin, which has invested $17 billion in a breakneck program to get the sleepy and remote coastal town ready to host the 2014 Games, had clearly hoped the spotlight would shift from Vancouver to Sochi amid the warm glow of Russian athletic triumph.

But, instead, Team Russia turned in the country’s worst Olympic performance ever, finishing in sixth place, with a total of 15 medals, just three of them gold. By comparison, the Russian winter athletes at Turin in 2006 brought home 22 medals, including eight golds.

Olympic fallout
That historic failure has triggered an outpouring of bitterness and recrimination, extending from the streets to the upper echelons of power, and seems bound to intensify scrutiny of the deeply troubled preparations for the upcoming Sochi Winter Olympics.

“Those responsible should take the brave decision and sign a letter [of resignation]. If they can’t, we will help them,” President Dmitry Medvedev said in a televised interview Monday, addressing the sports bureaucrats and Russian Olympic officials that most Russians deem to be guilty for the collapse of their once proud athletic machine.

But the poor showing of Russia’s first fully post-Soviet generation of athletes in Vancouver, and the challenge of retraining them to win on their home turf in four years time, may be the least of the Kremlin’s worries.

The still-powerful former President Vladimir Putin pulled out all the stops to win the 2014 Winter Games for Sochi, but preparation efforts have now become embroiled in allegations of corruption, poor planning, environmental disaster, and accusations that local authorities are suppressing media coverage of Olympic snags.

Sochi – no snow, lots of corruption
“It would be very hard to find a place in Russia that has no snow in the wintertime, but that’s just what Putin did,” says Boris Nemtsov, a former deputy prime minister, Sochi native and co-author of a critical report on the Olympic preparations around Sochi.

“Sochi is the warmest place in Russia, with no infrastructure, no experience in winter sports – it doesn’t even have a hockey team – and many other problems,” he says. Among those he lists corruption, which he says has reached Olympean heights amid the scramble for the kind of gold that comes from construction contracts.

Mr. Putin told Russian journalists this week that everything is going according to plan in Sochi, and that by the time the Olympics open in 2014 some 207 new “objects” will have been completed, including six ice stadiums and a vast mountaintop complex that will include a ski center, a bobsled run, a snowboard park, a biathlon center, and an Olympic ski jump, along with dozens of hotels, resorts and associated services.

Though everything must be built from scratch, Putin said, “that gives us the opportunity to construct everything at the highest level.”

The $130-million road
But Mr. Nemtsov claims that a road being built along the left bank of the Mzymta River, to connect the mountaintop sports venue of Krasnaya Polyana with the seaside Olympic center, will be the world’s most expensive road.

“This road is costing $130 million per kilometer to build,” he says. “That’s about 50 times the average cost of a highway in the United States and an indication of how utterly corrupt these preparations around Sochi have become.”

Last year Nemtsov, a co-chair of the opposition Solidarnost movement, stood as a candidate in Sochi mayoral elections that were won overwhelmingly by the Kremlin-backed favorite. Many critics at the time decried what they called a stage-managed election marked by fraud, suppression of media freedom, and the massive deployment of official resources to ensure the desired result.

Russian environmentalists, for their part, are furious about the new Olympic mountain road and associated high-speed rail link, which they say are unnecessary because there already is an adequate two-lane highway connecting Krasnaya Polyana with Sochi, along the river’s less ecologically sensitive right bank.

“To build this new road they’ve already chopped down ancient forests and destroyed rare species of trees, all in what was formerly a strictly protected National Park,” says Igor Chestin, CEO of the World Wildlife Federation’s Russian branch.

Environmental impact
Environmentalists are extremely worried about the mountain cluster at Krasnaya Polyana, where some facilities – like the bobsled run – will affect the adjacent national park, a UNESCO heritage site that is the largest surviving alpine wilderness in Europe.

Mr. Chestin says the mountain complex has already interfered with the migratory patterns of many local species, including the brown bear, red deer, wild boar, ibex, and a very rare breed of mountain antelope called chamois.

“A very high price is being paid for the rush with which many of these Olympic objects are being built,” he says. “There might be ways to minimize the adverse effects of this hasty construction, but these are not being realized.”

The WWF, which was formerly working closely with Russian authorities, has pulled out of one consultative committee and is threatening to end its cooperation altogether over what it says is a failure to honor decisions that have been agreed upon after painstaking discussion and study.

“Many conclusions that have been arrived at just don’t get implemented. It’s very frustrating,” says Chestin.

Environmentalists are also up in arms over the imposition of a special “border regime” in the area of Olympic construction, which puts the entire zone under control of Russia’s FSB security service. They charge that security forces are using border regulations to selectively harass and in some cases arrest environmental activists and other protesters.

And this week the independent, Paris-based Reporters Without Borders weighed in with a report that accuses Russian authorities of stifling media criticism of Olympic snafus and “press-ganging them into supporting the Kremlin policy of ‘the games at any cost.’ “

“Too many issues are solved without any public airing at all, and officials suffocate media attempts to gain access,” says Mikhail Melnikov, an expert with the Center for Journalism in Extreme situations, a Moscow-based media watchdog.

“All big construction projects mean big money and there is no secret that big money in Russia is closely connected with corruption,” he adds. “Any journalist who writes about this is running a big risk. Our leaders talk about the need to fight corruption, but in practice local officials prevent any information from becoming public,” he adds.

Nemtsov argues that it might be wiser to consider holding the Games in Moscow, where plenty of Olympic-quality facilities and infrastructure already exist, rather than continuing the rapid and allegedly heedless development of Sochi. But he says that the political reputation of Vladimir Putin has become so intertwined with the Sochi venue that no discussion of alternatives is possible.

“Putin believes that this is his personal project. He’s very proud that he brought the Winter Games home for Sochi, and this will be the enduring legacy of himself and his presidency,” says Nemtsov.

“So, he’s ready to spend unlimited funds, and take any kind of environmental risks, to make it happen.”