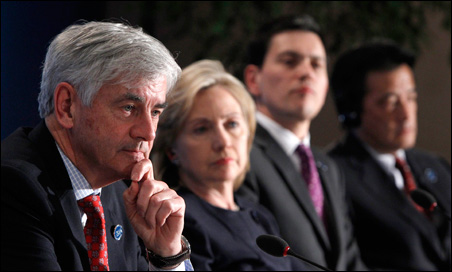 ISTANBUL, TURKEY — Foreign ministers at the G8 meeting in Canada on Tuesday focused on Iran nuclear ambitions and the actions of two capitals very far away.

At the top of the agenda for the world’s eight leading industrial nations was building consensus to impose more United Nations sanctions on Tehran – nearly 6,000 miles away from the summit venue near Ottawa – unless Iran resolves outstanding questions about possible weapons-related work.

But that would depend on decisions made by China – its leaders in Beijing some 6,500 miles away in the opposite direction, who are not in the exclusive G8 club but have veto power in the UN Security Council.

“There is much at stake,” Mr. Harper said. “If nuclear proliferation leads to the use of nuclear weapons, whether by states or non-state actors, then no matter where the bombs are set off, the catastrophe will be felt around the world.”

A draft of the final communique called for “appropriate and strong steps” over Iran’s nuclear work, adding that the G8 remained willing to talk to Tehran, Reuters reported. In addition to the US, the G8 includes Canada, Britain, France, Germany, Italy, Japan, and Russia.

Growing momentum against Iran
Previous Security Council resolutions demand that Iran stop all nuclear enrichment activities. But Iran says that as a signatory of the Nuclear Non-Proliferation Treaty (NPT), it has a right to nuclear energy, is expanding its efforts, and dismisses claims that it wants an atomic bomb.

Could China be persuaded to back a fourth round of UN sanctions against a key trading partner? Officials at the G8 meeting, which opened Monday, said they felt momentum growing against Iran – and that China was coming around.

US Secretary of State Hillary Clinton said on Monday that “China will be involved” in the “hard work of trying to come up with a Security Council resolution” against Iran.

“China is part of the consultative group that has been unified all along the way, which has made it very clear that a nuclear-armed Iran is not acceptable to the international community,” Mrs. Clinton said in an interview with Canadian TV.

More summits on global security coming soon
This G8 meeting is first in a series of high-level global talks this spring meant to address international security and economic issues. Next month, President Barack Obama hosts a security summit, and in June, heads-of-state summits of the G8 and G20 are planned in Canada.

The increase in pressure on Iran also coincides with preparations for a review of the NPT, slated for May in New York.

“The NPT bargain is now under pressure from the perception that the nuclear weapons states have not disarmed, from the actions of countries like Iran and North Korea and from the perceived lack of support for the peaceful uses of nuclear energy,” Canadian Foreign Minister Lawrence Cannon said on Monday.

“For the sake of future generations, we need to work to renew and expand the global consensus around the treaty and its goal of a world without nuclear weapons,” Mr. Cannon said.

US sanction push gets mixed results
An increasingly common thread in such meetings has been the perennial push by Washington to sanction Iran for what it deems to be defiant behavior. Russia – which is building Iran’s first nuclear power plant at Bushehr, in a $1 billion deal due for start-up this summer, has signaled that it could support more sanctions.

Yet China on Tuesday, at least publicly, said it preferred a negotiated solution. “We hope relevant parties could fully show their flexibility and make further efforts toward a proper resolution of this issue through diplomatic means,” said Chinese Foreign Ministry spokesman Qin Gang.

In Canada, the spokesman for Japanese Foreign Minister Katsuya Okada said there had to be a “stronger response” to Iran’s continued enrichment, which could include more sanctions. “We hope China, together with Russia will get on board to make any decision effective,” the spokesman said.

A senior US official told reporters traveling with Clinton that the “Chinese have said now that they will engage on the elements of a sanctions resolution,” according to news agencies.

Iran has said it will not suspend its nuclear energy program, and that religious faith prevents it from pursuing a weapon. President Mahmoud Ahmadinejad last week said any new sanctions would have no effect on the Islamic Republic.