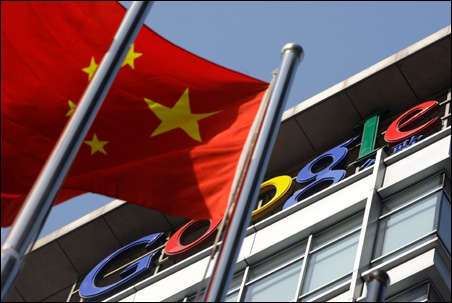 SAN FRANCISCO — After two months of negotiations with Chinese officials over the country’s Internet censorship rules, Google pulled the plug on its China-based website Monday and began redirecting traffic to an uncensored site based in Hong Kong.

Google said it would quit adhering to Chinese web filtering policies after discovering it was targeted in a sophisticated cyber attack originating from China and that Gmail accounts belonging to Chinese human rights activists were routinely compromised.

While the Mountain View, Calif., search giant said in a statement that it hopes to keep sales and research and development operations in China, the move to circumvent the censors certainly puts its presence there on rocky footing.

The decision to host its search operation in Hong Kong could be a precursor to a complete departure from China, potentially cutting Google off from the country’s 400 million users – the world’s biggest Web audience.

“We want as many people in the world as possible to have access to our services, including users in mainland China, yet the Chinese government has been crystal clear throughout our discussions that self-censorship is a non-negotiable legal requirement,” said David Drummond, Google’s chief legal officer, in the statement.

“We believe this new approach of providing uncensored search in simplified Chinese from Google.com.hk is a sensible solution to the challenges we’ve faced – it’s entirely legal and will meaningfully increase access to information for people in China,” he said.

The Chinese government has yet to respond to Google’s decision, which is being hailed by many online free speech advocates.

“Whether the Chinese people will be able to take advantage of Google search now rests squarely with the Chinese government,” said Leslie Harris, president and CEO of the Center for Democracy & Technology, in a statement. “If China blocks access, it will finally make clear to the Chinese people who is pulling the levers of censorship in the country.”

Others suggest that Google could be the first wave of technology companies taking a firmer stance against censorship.

According to the Washington Post, Sen. Richard Durbin (D-Ill.) is considering a bill that would require “Internet companies to take reasonable steps to protect human rights, or face civil and criminal liability.”

Google entered China in 2006 somewhat reluctantly. While the company was uneasy with Chinese censorship rules, it accepted the policies, hoping the value of its other services would benefit the Chinese people and that censorship laws would eventually ease.

But according to Google officials and China watchers, the country’s grip on online information has been tightening as Internet usage continues to climb.

“It all comes down to whether the Chinese government decides operating off a Hong Kong domain – rather than the main Chinese domain – lets Google get around its censorship rules,”  Sullivan wrote Monday.

By Michael B. Farrell