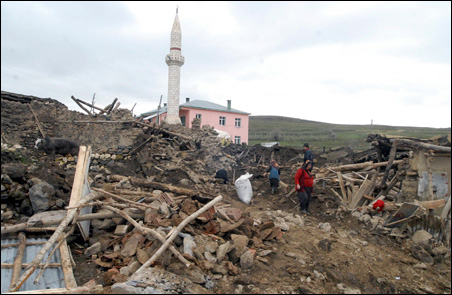 REUTERS
People walk around a destroyed house in Okcular Village, in Elazig province on Monday.

BOSTON — In yet another deadly rumbling of the earth’s crust, a Turkey earthquake killed at least 51 people early this morning. But scientists are warning against drawing conclusions about increasingly frequent earthquakes.

The 6.0-magnititude earthquake hit at a 4:32 am local time in Elazig province in eastern Turkey, about 340 east of the capital Ankara. It knocked down stone and mud-brick houses, according to reports. More than 50 aftershocks measuring up to 5.5 vibrated the region and slowed efforts to treat dozens of injured people.

“Everything has been knocked down, there is not a stone in place,” Yadin Apaydin, administrator for the village of Yukari Kanatli, where at least three people died, told the Associated Press.

The government initially put the death toll at 57 but lowered it to 51. Turkish Prime Minister Recep Tayyip Erdogan told the press: “Teams from the state mass housing project have also been sent to the area to study how to rebuild the area in different methods.”

The Turkey quake comes on the heels of quakes measuring 6.4 in Taiwan, 8.8 in Chile, and 7.0 in Haiti, raising speculation of a link.

Richard Luckett, a seismologist from the British Geological Survey, told the Associated Press there has not been a spike in global seismic activity.

“If there was a big increase in the number of magnitude 6.0s in the past decade we would know it because we would see it in the statistics,” Luckett said. “We haven’t seen an increase in 7.0s either.”

According to the US Geological Survey, the earth usually has one magnitude 8 or higher earthquake per year, some 17 quakes between 7 and 7.9, and roughly 132 earthquakes a year with a magnitude between 6 an 6.9 – like the most recent quake in Turkey.

The recent earthquakes are not abnormal in frequency, scientists say, but have received more attention because of the loss of human life.

Earthquakes are frequent in Turkey, which sits atop two major fault lines.

In 2007, a 5.7-magnitude quake damaged buildings in Elazig. In 2003, a 6.4-magnitude quake killed 83 children when a school dormitory collapsed in Bingol. In 1999, two powerful earthquakes struck northwestern Turkey, killing about 18,000 people.

“The point is that earthquakes are common and always have been,” Dr. Luckett told the AP.