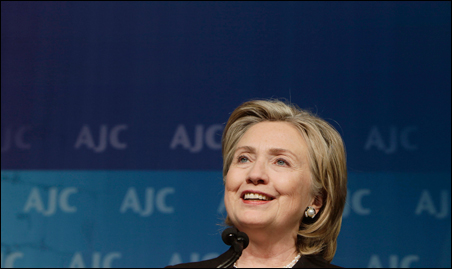 Even as the US will likely grant Iran President Mahmoud Ahmadinejad a visa to visit New York City for the nuclear Non-Proliferation Treaty (NPT) review conference, which opens Monday, members of the Obama administration said the gesture in itself means little and it has not relented on its calls for sanctions on the Islamic Republic.

US Secretary of State Hillary Clinton said Thursday she did not see Iran’s purpose in attending the NPT conference, which runs through May 28, because their violations since signing the NPT are “absolutely indisputable.” The purpose of the NPT review, which happens every five years, is to reaffirm signatories’ commitments to the 1970 treaty’s three purposes: disarmament, nonproliferation, and peaceful use of nuclear energy, Mrs. Clinton said at the news conference, according to Reuters.

Clinton said the international community would welcome an announcement from President Ahmadinejad – the highest-ranking official from any country expected to attend the conference – that Iran will begin abiding by NPT rules. But if he thinks “he can somehow divert attention from this very important global effort or cause confusion that might possibly throw into doubt what Iran has been up to… I don’t believe he will have a particularly receptive audience,” she told reporters, according to Agence France Presse.

Clinton, speaking again Thursday at the American Jewish Committee gala dinner in Washington, also used some of the administration’s strongest language yet against Iran. She called the threat it posed to Israel “real” and “growing”.

“Iran, with its anti-Semitic president and hostile nuclear ambitions, also continues to threaten Israel, but it also threatens the region and it sponsors terrorism against many. … At every turn, Iran has met our outstretched hand with a clenched fist. But our engagement has helped build a growing global consensus on the need to pressure Iran’s leaders to change course. We are now working with our partners at the United Nations to craft tough new sanctions.”

She also said the US was working with its Israeli partners to address the threat.

Speaking after Clinton at the gala, Israeli Defense Minster Ehud Barak referred to the recent escalation of tensions between the US and Israel, saying, “I feel very strongly that these differences, these slight disputes, are behind us,” according to CNN.

In addition, Under Secretary for Arms Control and International Security Ellen Tauscher told a group at the Center for American Progress that the NPT is under stress from countries that dodge its norms, naming Iran and North Korea. Using the “guise” of a peaceful program for energy, Iran has pursued nuclear weapons and violated the International Atomic Energy Association and UN Security Council obligations, she said, according to the Press Trust of India:

Clinton’s spokesperson said that a face-to-face meeting between Iranian and American diplomats at the NPT review was highly unlikely.