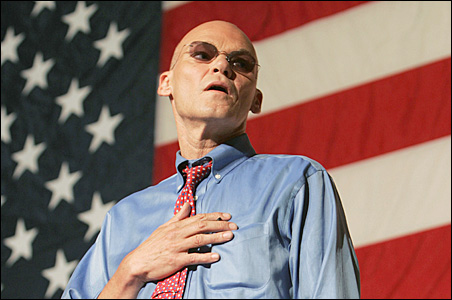 REUTERS/Peter Morgan
James Carville: “The hardest thing to do in all of political communication is … deal with a bad, but somewhat improving, economy.”

The Obama White House needs to do a better job communicating a coherent economic plan as it heads into the 2010 election season, according to James Carville and Stanley Greenberg – two top Democratic strategists who spoke at a Monitor-sponsored breakfast on Wednesday.

New unemployment figures coming out Friday are expected to show the economy finally gained jobs in March after months of job losses. Though that news would be welcome, the recession is still being keenly felt by voters.

“The recession has actually accelerated for people who are living in this economy,” said Mr. Greenberg, chairman of Greenberg Quinlan Rosner Research.

For the population segments that helped sweep President Obama into office – unmarried women, Latinos, young voters – the recession “has gotten much worse for them and they have gotten more pessimistic,” Greenberg said.

In this difficult climate, the Obama White House needs to improve its communications, according to Mr. Carville, a political science professor at Tulane University who ran Bill Clinton’s presidential campaign.

At the breakfast, Carville said he has told Obama White House officials, “I wish you would be more about conveying there is a strategy. You don’t have to change anything, just repackage it as a plan that is in place, that we are starting to show some progress as opposed to a set of policies which, depending on your political ideology or your political leanings, you may agree or disagree with.”

Carville, who’s also a CNN commentator, was quick to note that neither he nor any other strategist “has the holy grail of how to do this.”

“The hardest thing to do in all of political communication is … deal with a bad, but somewhat improving, economy.” he said.

Mr. Obama’s State of the Union speech in January was “a very successful speech” Greenberg said. But he noted that the section of the address where Obama talked about bringing the US economy “back from oblivion” was very unpopular with a group of swing voters that Greenberg had assembled to listen to the speech.

“The dial meters went through the floor,” he said. “People hate it. They think it is arrogant. It means you are not in touch with their experience.”

The president’s communication challenge will be especially keen with white males who have blue collar jobs, Greenberg noted.

“White blue collar voters, particularly males, took a big hit in this deep recession. Everything we measure in our survey shows they are … worse off in terms of how much they have been impacted by this,” he said. “And as we go into this so-called jobs recovery, they won’t be feeling this. So as the elites try to make the case that this thing is coming back and the economic policies work, they are going to be angrier and angrier about the elites not getting what is happening to them.”