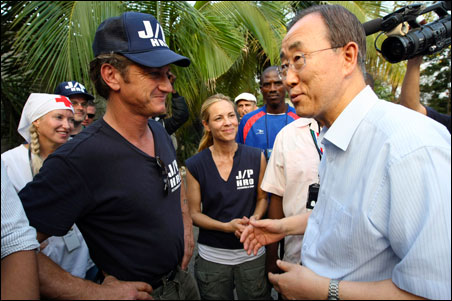 PORT-AU-PRINCE, HAITI — Haiti’s Petionville Club used to be frequented by the elite of the elite. But after the Jan. 12 earthquake the crowded capital’s greenest spot has been transformed into a rainbow of multicolored tents, tarps, bed sheets, and cardboard used in efforts to rebuild Haiti.

It’s now a refugee camp for tens of thousands of the more than 1 million Haitians made homeless by the quake.

The grass of the former golf course is virtually unrecognizable with trucks transporting food, water, hygiene kits and building material leaving tracks four inches deep in the mud that now blankets the area.

And an influential group of another nature has replaced the elite, who are long gone. Celebrities.

Just after the quake, movie star-activist Sean Penn set up camp within the camp, and has been working side by side with hundreds of volunteers ever since. Pop star Shakira stopped by the camp briefly Sunday while in the country looking for suitable land for her charity, Barefoot, to build a school for poor children.

Monday’s agenda was moving people from the congested, flood-prone camp to a new area designated by the government about 20 kilometers north of the capital.

Radio in hand, Penn tried to make sure that the relocation went smoothly. One little boy who looked to be about 5 was unhappy about the move, even though it is voluntary.

“It’s a good thing,” Penn said through a translator. “Talk to your mom, she’ll tell you that.”

The boy shook his head, unconvinced.

Despite the conditions, many don’t want to leave their friends, neighbors and all that is familiar, even if it’s now a pile of debris, a flimsy tent, or a leaky tarp.

Still, for the past few days, the JPHRO has been ferrying people in four air-conditioned buses, four times a day, to the new settlement.

Sean who?
Many of the people moving don’t know who Penn is.

Some have heard there’s a famous actor living with them, but are more concerned with staying alive, and dry.

A few were impressed when they learned that actor Danny Glover visited recently, and smiled when they heard of Shakira’s visit on Sunday.

They know Mr. Glover because he’s been coming to Haiti for years. And they know Shakira from her music video with Wyclef Jean, a Haitian grammy-winning artist who performed “Hips Don’t Lie” with the Colombian artist at the World Cup several years ago.

Mud, mud everywhere
Haitian refugee Patrick Gerville knows both Penn and Shakira. “But they are up there,” he says, pointing to the top of the hill. “And I am down here.”

His tent is still packed with mud from the rains that have drenched the capital the last three nights. He’s slated to move this week.

JPHRO is financing a cash-for-work project to deal with the runoff from all the rain. Builder Petty Officer 3rd Class Jacob Bronson oversees a crew of 20 that are split between building a wall to prevent landslides and digging drainage ditches.

He watched Shakira walk through the camp for about 10 minutes on Sunday.

“She gave them hugs,” he says, “and I think that also gave them hope.”

They’ll need more than that, though.

Meteorologists from AccuWeather.com are forecasting several inches of rain across much of Haiti this week, making an already tough situation even worse as the rainy season looms.

IN PICTURES: Celebrities giving to Haiti