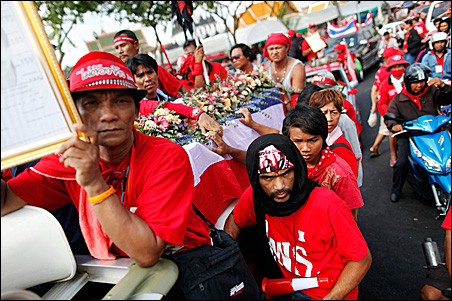 The parade looped around a subdued city, which many residents had already exited for a week-long New Year holiday, normally a joyful time. The somber mood was driven home by the coffins draped in flags on the back of pickup trucks, with a framed formal photo of slain protesters.

Protest leaders have vowed to rally until Prime Minister Abhisit Vejjajiva resigns and dissolves parliament, which he has said could take as long as nine months, a timeline rejected by protesters.

Thailand’s Electoral Commission dealt another blow to the prime minister today, recommending that the ruling party be dissolved. It found that the Democrat Party had misused campaign donations. While chipping away at the legitimacy of the ruling party, the electoral commission’s recommendation has to be approved by the Constitutional Court, which has not yet set a date to hear the case.

Standing on a bridge to cheer the passing convoy, Sukit Opachaloemphan, an American-educated engineer, cursed the prime minister for his handling of the protests. “He has to take responsibility. He made the decision for the military to go in and continue after dark,” he says.

‘Terrorists’
In contrast to the boisterous defiance of the protesters, Mr. Abhisit has used solemn televised addresses to tell his story. He has blamed rogue gunmen, or “terrorists,” for the intense violence (at least 21 people died and 800 were injured) and emphasized the need for a full investigation into the killings of both soldiers and protesters. State television has broadcast repeated images of soldiers coming under fire from bullets and explosives.

Abhisit said today that his government was in tact and unified with the military, a key constituent in Thailand.

Earlier, Army Commander Gen. Anuphong Paochinda called for a political solution and said elections might be the answer. Coalition partners in Abhisit’s government are reportedly discussing their position and may emerge as peace brokers.

As more details emerge of the carnage, Bangkok’s worst political violence since 1992, military observers say Thai troops stumbled into a trap set by agent provocateurs with military expertise. By pinning down soldiers after dark and sparking chaotic battles with unarmed protesters, the unknown gunmen ensured heavy casualties on both sides.

Some were caught on camera and seen by reporters, including this one. Snipers targeted military ground commanders, indicating a degree of advance planning and knowledge of Army movements, say Western diplomats briefed by Thai officials. While leaders of the demonstrations have disowned the use of firearms and say their struggle is nonviolent, it is unclear whether radicals in the movement knew of the trap.

“You can’t claim to be a peaceful political movement and have an arsenal of weapons out the back if needed. You can’t have it both ways,” says a Western diplomat in regular contact with protest leaders.

Links to rogue elements?
Sean Boonpracong, a spokesman for the red shirts, denied any links to rogue elements. “Most of the reds are fighting with their bare hands or rocks or water bottles. If this was a third hand we’d like to know who it was. It definitely wasn’t us,” he says.

Some observers questioned how the military could have blundered into battle without adequate preparation. Agents provocateurs, known to Thais as Third Hands,” have helped foment past political conflicts, and appeared in a 2008 confrontation involving protesters from a rival royalist camp that supports the current government.