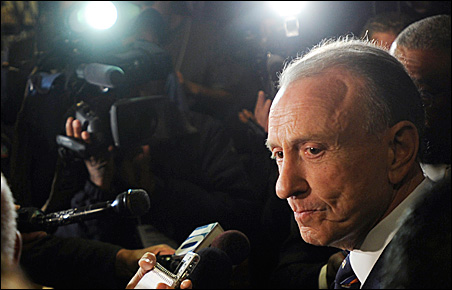 WASHINGTON — The defeat of Arlen Specter — Pennsylvania’s longest-serving senator in history — and the victory of “tea party”-backed Rand Paul in his Kentucky Senate primary Tuesday signal a restless electorate disinclined to follow the wishes of the Washington establishment of both parties.

In Pennsylvania, the storied political career of Senator Specter comes to an end despite the backing of the president and governor, the latest evidence that political coattails are a myth in this age of the independent political operator. Despite final polls showing a tight race, Specter lost to Rep. Joe Sestak in the Democratic primary 54 to 46 percent. Congressman Sestak will face former Rep. Pat Toomey (R) of Pennsylvania in November.

In Kentucky, novice politician Rand Paul — son of the libertarian former presidential candidate Rep. Ron Paul (R) of Texas — decisively beat the GOP’s hand-picked candidate, state Secretary of State Trey Grayson, 59 to 35 percent. The Paul victory represents the largest win yet for the tea party movement, an antitax, small-government backlash that has energized conservatives across the country for more than a year. The Grayson defeat was also a defeat for Senate minority leader Mitch McConnell, who had recruited Mr. Grayson to run. In November, Paul will face state Attorney General Jack Conway, who narrowly defeated the more conservative Lt. Gov. Daniel Mongiardo in the Democratic primary.

In a way, the Democratic Party was the biggest winner Tuesday as Democrat Mark Critz won the special election in Pennsylvania’s 12th Congressional District for the seat held 35 years by Rep. John Murtha. Mr. Critz had served as an aide to Congressman Murtha and parlayed that lingering affection for the late congressman — and his own local knowledge of a hard-scrabble district accustomed to federal largesse — into victory. The Critz victory against wealthy GOP businessman Tim Burns, 53 to 45 percent, dealt a major blow to Republican hopes of a House takeover in November and gave the Democrats a boost of confidence amid all the dire predictions.

“For all of their bluster about building a national wave this year … Republican policies were once again rejected when it came time to face the voters,” Rep. Chris Van Hollen of Maryland, chairman of the Democratic Congressional Campaign Committee, said Tuesday night in a statement.

Pennsylvania’s 12th District a laboratory for November
The Democrats’ winning streak in contested special House races in the past year now stands at three, though it is expected to end in Hawaii on Saturday, in a special election to fill the seat of former Rep. Neil Abercrombie (D), who resigned to run for governor. Two prominent Democrats are running in that race, and they are expected the split their party’s vote, handing victory to the Republican.

In Pennsylvania’s 12th District, some Republicans pointed out a 2-to-1 Democratic voter-registration advantage, but it is still exactly the kind of district Republicans need to win in November if they are to overcome the Democrats’ 41-seat margin in the House. PA-12 was the only district to vote for Sen. John McCain (R) for president in 2008 after voting for Sen. John Kerry (D) for president in 2004. Critz’s anti-abortion, pro-gun views match the district. He was also helped by the hotly contested Democratic Senate primary, which drove turnout among Democrats.

PA-12 also served as a laboratory for November, as both parties tested arguments and strategies. Critz kept the race local, and not a referendum on Washington Democrats. That meant distancing himself from President Obama and House Speaker Nancy Pelosi, and opposing health-care reform.

Pennsylvania’s Senate race
In Pennsylvania’s statewide Senate primary, the Washington establishment was front and center. Specter had switched from Republican to Democrat a year ago, sensing he would lose the GOP primary. In return, the White House and Gov. Ed Rendell (D) promised Specter major support, including doing whatever they could to prevent a primary. Sestak would not cooperate, and even suggested that the White House had offered him a high-ranking position (perhaps Navy secretary) in exchange for not running.

Sestak began the race as a little-known congressman and held off on TV advertising untll late in the race. The ad finally aired to devastating effect, as it featured a clip of Specter saying he had switched parties so he could be reelected.

As much as the Pennsylvania primary is being framed as a rejection of the Washington establishment, that analysis goes only so far. Specter’s 30-year career in the Senate as a Republican was apparently too much to swallow for many Pennsylvania Democrats, especially the kind of party loyalists who show up for a primary. Turnout was low, which killed Specter’s chances. In the general, Specter argued that he would be stronger against Toomey than Sestak, but that prospect was debatable. In a cycle where other old familiar faces are getting the heave-ho – see Sen. Bob Bennett (R) in Utah, who lost a spot on the primary ballot in his state’s recent GOP convention — the fresher face of Sestak may have a less-difficult time defending the seat for Democrats.

Endangered incumbent in Arkansas
In another race Tuesday, the hotly contested Democratic Senate primary in Arkansas landed incumbent Blanche Lincoln in a June 8 runoff against her more-liberal challenger, Lt. Gov. Bill Halter, after she failed to win a majority of votes. With 94 percent of precincts reporting, Lincoln had won 45 percent of the vote to Mr. Halter’s 42 percent. A third candidate, D.C. Morrison, won 13 percent. In the runoff, Senator Lincoln and Lieutenant Governor Halter will go head-to-head. Rep. John Boozman (R) of Arkansas won the Republican primary.

In the other state to hold primaries Tuesday, Oregon, there were no surprises. In the governor’s race, former Portland Trail Blazers basketball player Chris Dudley (R) and former Gov. John Kitzhaber (D) won their primaries and will face off in November.