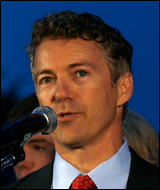 On Tuesday, Rand Paul showed the possibilities before the “tea party” movement with his landslide win in Kentucky’s Republican primary for US Senate.

Since then, he has showed the tea party’s limitations.

In the past five days, Mr. Paul has made several elementary political errors.

He has equivocated on whether the Civil Rights Act was right to force private business to comply.

He has called the Obama administration “un-American” for saying its job was to keep its “the boot on the neck of BP” in the Gulf oil spill.

And he has said that the search for blame in the West Virginia mine accident might be fruitless. Sometimes “accidents happen,” he said.

The comments do suggest political naivete. But to cast them off as merely the product of political inexperience is perhaps to gloss over one of the greatest challenges facing the tea party movement as it seeks to influence politics.

To remain true to the tea party ideology – to go beyond the Beltway horse-trading and firmly stand on the principles of a smaller, less-intrusive government – is, in some instances, to occupy a spot on the political fringes that is anathema and in some cases abhorrent to many in the American mainstream.

What the tea party wants

While Paul’s comments are political gaffes, they do not appear to be too far afield from tea party doctrine – to the degree that such a thing exists.

The battle flag of the tea parties has been the Revolutionary War “Don’t Tread on Me” banner. But the enemy to liberty, in this instance, is not the British, but the overbearing American government itself.

The tea parties’ 10-point Contract From America includes “restore fiscal responsibility and constitutionally limited government in Washington.” As if to underscore the point, it also includes: “demand a balanced budget” and “end runaway government spending.”

Paul has been anointed to carry this gospel to Washington, and in each instance, Paul’s comments last week spoke to the desire to lessen the grip of the American government on its people – in this case, business.

In theory, almost all Republicans have this aim. The difference between Paul and more mainstream Republicans, however, has been his apparent willingness (or inability not to) speak the pure doctrine of Barry Goldwater libertarianism – regardless of the political costs.

Paul is burrowing deep into political theory. The fundamental question he is raising is: Who should be in charge of changing the United States – the government or the American people themselves?

Tea party principle, as interpreted by Paul, suggests that the American people must be free to evolve on their own. In other words, businessowners should have the right to discriminate – even though Paul says he “abhors” racism – because the alternative is a slippery slope of government interference, leading to tyranny.

For people like Paul, the hope is problems such as racism will be increasingly exposed as abhorrent, and society will gradually change on its own without government interference.

Yet on race in particular, one prominent conservative abandoned this philosophy.

The late William F. Buckley Jr., founder of the National Review, originally opposed the Civil rights Act. “I once believed we could evolve our way up from Jim Crow,” Mr. Buckley said in 2004, according to The New York Times. “I was wrong: federal intervention was necessary.”

Perhaps the greatest threat to Paul – and the tea party – is that they appear to be arguing a case that, for all practical purposes, has already been settled for the majority of Americans. The America of the Founding Fathers roots – a modest, decentralized, and agrarian nation – is gone, or is at least being pushed to the demographic margins, inhabiting the great red swath of the country’s middle.

Politically, the America of today is as much a product of Lyndon Johnson and Franklin Delano Roosevelt as James Madison and Thomas Jefferson – of the sprawling government programs of Medicaid and Social Security as much as the Second Amendment and its provision for nongovernment militias.

Though he was speaking of Paul and the Civil Rights Act specifically, Republican National Committee Chairman Michael Steele’s comment Sunday morning on “Fox News Sunday” appears to be broadly relevant to the tea party as a viable political movement:

Other, more seasoned tea party candidates, such as Florida’s Marco Rubio, might find it easier to bridge the worlds of rhetorical libertarianism and practical politics.

But, speaking generally, Paul’s controversial comments might offer more insight into what the tea parties actually want done in Washington – and the political difficulties of bringing it about.

Rand Paul and the limits of the ‘tea party’ revolution